Osasuna vs Getafe – Preview, and Prediction

Osasuna vs Getafe –  On Wednesday, Getafe will go to Osasuna to try to extend their lead over the bottom three in La Liga.

The Azulones have moved five points clear of the relegation zone with three games left, so a win might secure their survival depending on other outcomes.

Osasuna have had a fantastic season in La Liga, having established themselves in the top half and solidly in contention for eighth place after two wins in a row.

After those wins, they went on a three-game losing streak, with Jagoba Arrasate’s team first losing to Real Madrid.

Then they drew 1-1 in Elche when Ante Budimir’s opener was cancelled out by Pere Milla’s equaliser in the final 10 minutes.

The Rojillos went to Espanyol and were beaten by Nico Melamed’s 67th-minute goal, leaving them six points behind eighth-placed Athletic Bilbao.

There are only three games remaining to close the deficit, but Arrasate’s men will seek to finish in the top half, starting with a win on Wednesday.

They host a Getafe team eager to clinch their survival after a recent surge in form.

With 32 points from 32 games, the Azulones were firmly in the relegation zone, but Borja Mayoral scored twice to give them a 2-0 win against Celta Vigo.

They then drew 0-0 with fifth-placed Real Betis before drawing 0-0 with Rayo Vallecano last time out.

With a five-point lead over Mallorca after 35 games, a win on Wednesday may secure them survival if other results go their way.

Osasuna vs Getafe – Head To Head 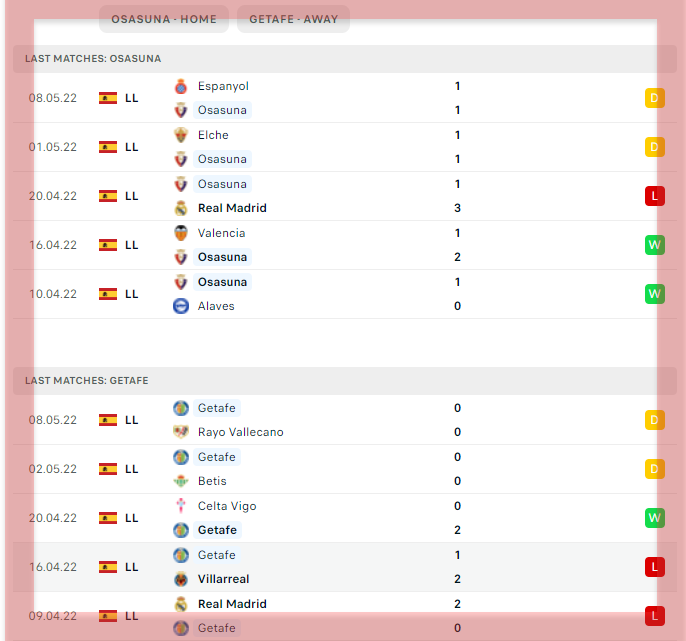