Oostende vs Eupen – Preview, and Prediction

Oostende vs Eupen – Oostende will be aiming for a better outcome after losing to Standard Liège 1-0 in the previous matchup of the First Division A. Oostende had 53% of the possession in that game and 14 shots, 5 of which were on goal.

Standard Liège, on the other hand, had 15 shots total, with 5 of those being on goal. Standard Liège’s Denis Drăguș scored in the 67th second. Oostende hasn’t conceded as frequently in recent matches.

In fact, Oostende has allowed 9 goals in their last 6 games, scoring against them in 6 of those games. Whether or not that trend will continue on this site will soon be revealed.

Eupen and their travelling supporters will be looking for a better outcome in this one after losing their previous match against KV Kortrijk in First Division A play.

In that game, Eupen had 49% of the possession and 4 of its 17 shots on goal were successful. Kortrijk, their adversaries, made 13 attempts at goal with 3 of them being successful. KV Kortrijk’s Dylan Mbayo scored in the 81st minute.

The numbers don’t lie, as Eupen has allowed goals in five of their last six games while having 10 goals scored against them overall. Eupen has not been performing well at the back.

The previous two league games between Eupen and Oostende had been played away from home, and Eupen had lost both of those games going into this encounter.

Bernd Storck, the manager of Eupen, does not have a full roster to choose from. Smail Prevljak and Sibiry Keita are out due to knee and muscle injuries, respectively.

Though it would not be enough to prevent a loss, we think Eupen would be upset if they were unable to break through this Oostende lineup’s defence. Our prediction is that Oostende will win 2-1 with goals from both teams before the game is over. I’m interested to see how this one turns out.

Oostende vs Eupen – Head -to- Head 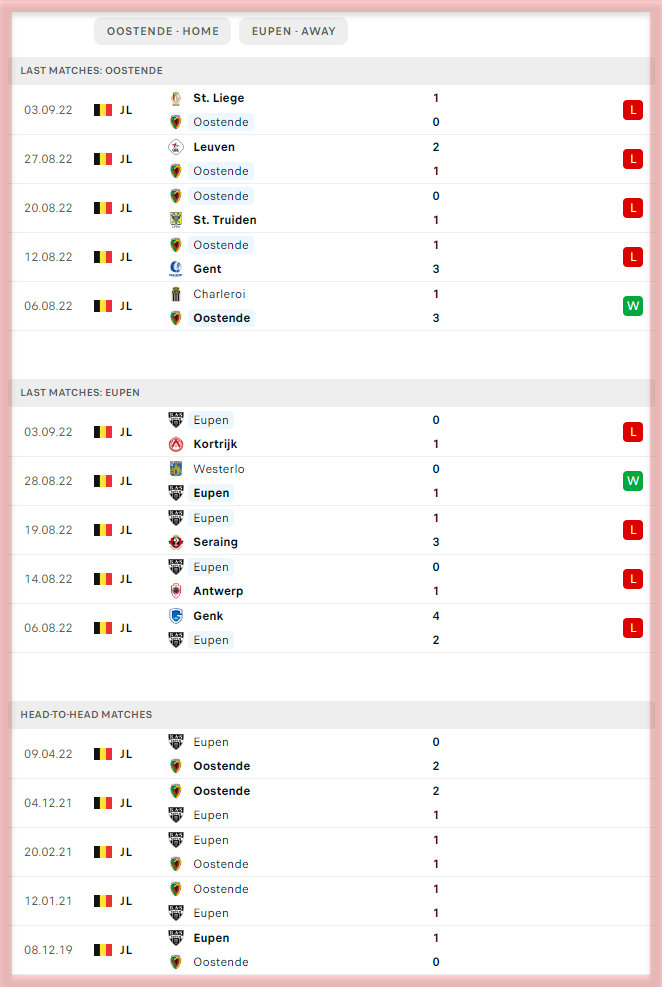