Olympiakos vs Slovan Bratislava – Olympiakos, the reigning Greek champions, have been in excellent form recently and will be desperate to achieve a win on Thursday in order to ease their way into the Europa League.

Meanwhile, Slovan Bratislava has recently struggled to deliver excellent performance, particularly on the road. Their defence has exhibited evident signs of vulnerability in recent matchdays, and as a result, they have been allowing a large number of goals.

They’ve been terrible on the road recently, rarely winning away in 2022. True, they won the Slovakian league last season, but they lack European experience, especially against the Greek champs.

Olympiakos won the Greek championship with such dominance that they had a 19-point advantage at the end of the season. They had only lost three times over this period and had scored the most goals while allowing the fewest.

Furthermore, they have a superior head-to-head record versus this opponent throughout the years, and based on all of these facts, it is projected that they will win this Thursday.

Olympiakos has an undefeated record against this opponent. They have scored two or more goals in 100% of their matches. The most recent encounter at this venue ended in a 3-0 victory for the hosts.

Olympiakos has won three consecutive games after being winless in 16 of their previous 23 overall matches. It’s also worth noting that they’ve only lost three times at home since November, during which time they’ve also gone on a 10-game winning streak.

Slovan Bratislava, on the other hand, had lost seven of their last ten games and had conceded two or more goals in three of their last five. Furthermore, they have only won four games away from home in the last four months. 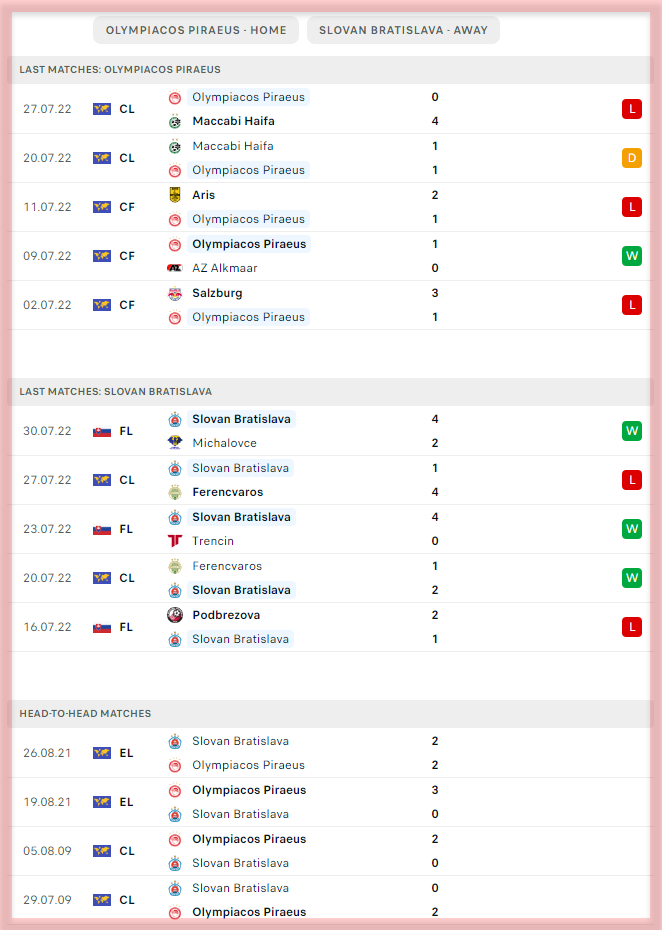