Odense vs Viborg – Preview and Prediction

Odense vs Viborg – Odense‘s play has been about average since the start of the season. Their performance put them in eighth place in the table for the teams in danger of going down. They will try to get enough points to move up to seventh place and get into the promotion zone.

In their most recent league game, Odense and Nordsjaelland played on the road and tied 1-1. With that tie, they have now gone seven games without losing in the league. They will want to keep the winning streak going, and being at home would make them feel good.

Viborg, on the other hand, hasn’t been doing well in the league lately. They are currently in seventh place, but that spot is in danger because Odense has been playing well lately and has closed the gap to just one point.

In their most recent league game, Viborg and Vejle played at home and tied, 2-2. With that tie, they have now gone four games without a win in the league. They need to stop this losing streak if they want to stay at the top of the relegation table.

Odense hasn’t lost to Viborg in 9 of the last 10 times they’ve played each other. In seven of the last ten head-to-head matches, the “both teams to score” bet was right. The last time they played, the score was 1-1.

Odense has changed so much in recent years. Recently, they went seven league games without losing, three of which were at home. All three of these things turned out well for them.

On the other hand, Viborg’s play on the road has been inconsistent and disappointing as of late. They haven’t won any of their last four league games on the road. On top of that, Odense has done well against Viborg in recent head-to-head matches.

So, we think Odense will beat Viborg on Thursday when they play each other in a Superliga game.

Odense vs Viborg – Head To Head 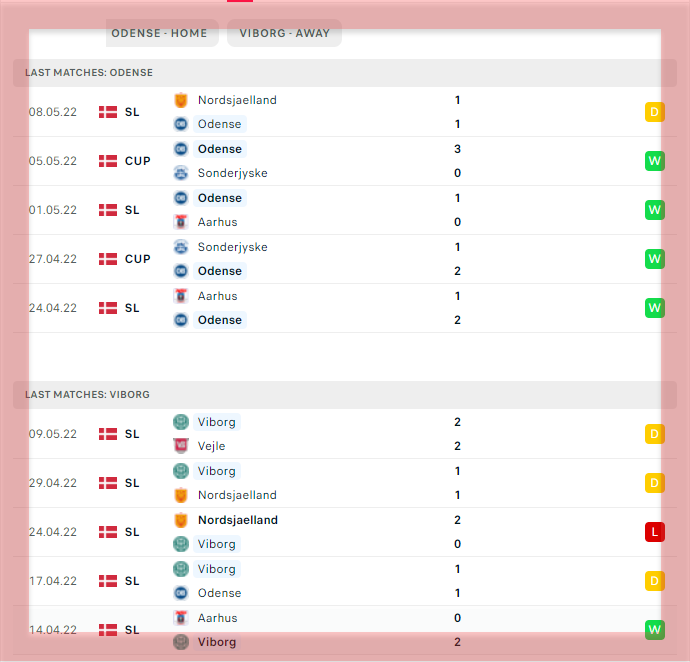