Nueve de Octubre vs Guairena – The top of Group E, Guairena FC of Paraguay, will play Nueve de Octubre of Ecuador at Estadio Modelo Alberto Spencer in Round 5 of the Copa Sudamericana on Wednesday.

This occurred after a 1-1 tie with Internacional in the previous group match Guairena FC is currently in eighth place in Paraguay’s Primera Division, with 17 points from 16 games.

Nueve de Octubre, on the other hand, is at the bottom of the group with four points from four games. They won and drew each game, with two losses. After two straight losses, the hosts defeated Ind. Medellin 3-2 in their last Copa Sudamericana match.

After 13 games, Nueve de Octubre leads the Ecuador Liga Pro by just eight points. The visitors are in last place in the league after a 1-1 draw with Macara in their previous match.

The hosts have gone 11 games without a win in the league and are eager for three points. They only met once in the reverse fixture, which Guairena FC won 1-0 with to a 95th-minute penalty.

Nueve de Octubre is now on a three-game unbeaten streak at home in various settings, and they are slowly gaining traction. In the Copa Sudamericana, they haven’t lost a single game at home and have collected four points on their own turf.

Guairena FC, on the other hand, has not won on the road in their last five games. In the group, they only played one away game, which finished in a tie. We expect a home win on Wednesday, as the hosts are still difficult to beat at home, and their previous meeting was a close one. 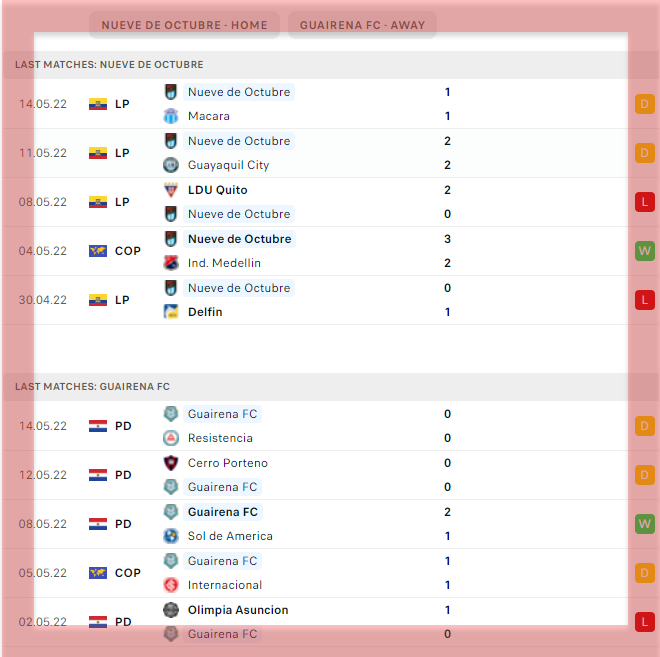