Norwich vs Huddersfield – Preview and Prediction

Norwich vs Huddersfield – When Norwich City hosts Huddersfield Town at Carrow Road on Tuesday night, they will be looking to get back on track after a challenging start to life back in the Championship.

The Terriers defeated Stoke City 3-1 to snap their losing streak while the Canaries lost 2-1 to Hull City during the weekend. The only thing Norwich had to celebrate on their trip to Hull was a magnificent free kick from Marcelino Nunez, as Dean Smith’s team had already given up twice when the 22-year-old newcomer scored to close the gap in the second half.

The damage was done by a brace from Oscar Estupinan as Norwich’s problems in the second tier persisted, but Smith has insisted that there is no cause to panic just yet, despite the fact that some away supporters undoubtedly made their emotions known.

The Canaries have only accrued one point out of a potential nine thus far in the season, with their lone success coming in an EFL Cup penalty shootout. The hosts have also only won one of their last four Championship home games.

Despite the fact that both of Smith’s team’s losses thus far this season have come on the road, the fixture scheduling is not improving for the injury-plagued Canaries, as their forthcoming opponents had far better weekend results.

After almost saying that Huddersfield’s 3-1 victory over Stoke was a happier occasion than the birth of his children, Danny Schofield may find himself in hot water at home. This only served to highlight the significance of the Terriers’ first victory of the year.

Huddersfield had lost back-to-back games in the Championship to Burnley and Birmingham City and was crushed 4-1 by Preston North End in the EFL Cup, but Schofield’s team capitalised on their opportunities on Saturday.

Yuta Nakayama, Danny Ward, and Jordan Rhodes scored goals for Huddersfield after Lee Nicholls turned away Lewis Baker’s early penalty. Baker had evened the score at 1-1 after missing his penalty, but the Potters captain’s effort was in vain.

The next game cannot come soon enough for Huddersfield after ending a three-game losing streak in the second division. Huddersfield was somewhat thanking their lucky stars as Stoke wasted opportunity after opportunity to get back into the game at the John Smith’s Stadium.

The Terriers are in terrific shape with just two losses in their previous 15 away Championship games, but they won’t need reminded of what happened the last time they visited Carrow Road because Norwich beat them for seven without answering in April 2021.

Norwich vs Huddersfield – Head -to- Head 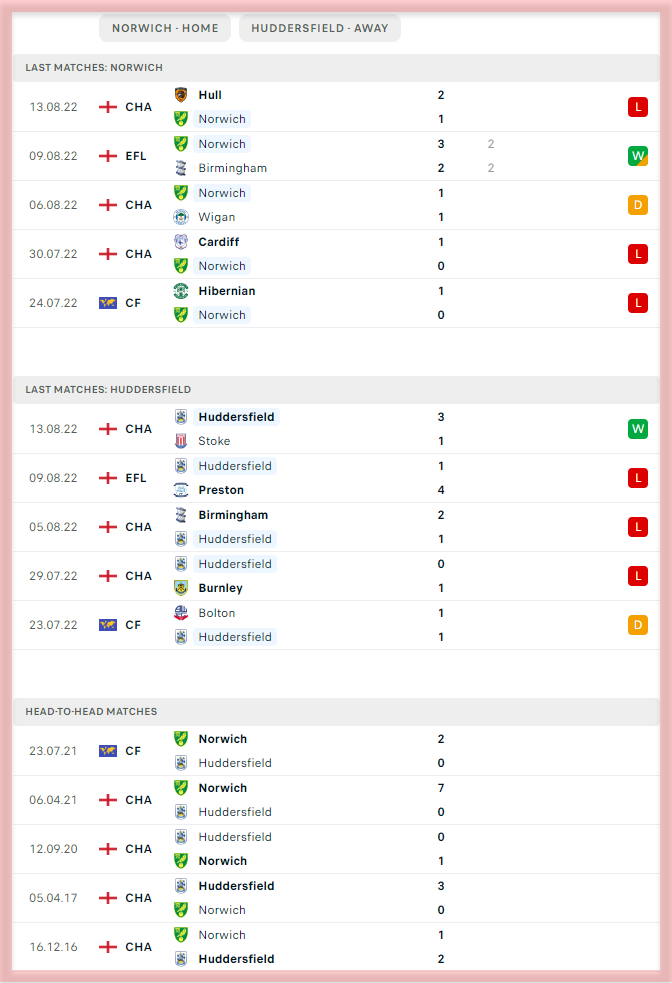