Northampton vs Stockport – Preview, and Prediction

Northampton vs Stockport – As they host League Two’s bottom-dwelling Stockport at Sixfields Stadium this weekend for matchday 10 of the season, Northampton will try to continue their winning streak. This year, Jon Brady’s team is enjoying a fantastic campaign. They are just five points away from taking the top spot in the standings. They have also won their last three League Two games.

Most recently, they won 3-0 over Rochdale, the team in last place. Sam Hoskins recorded a brace in that game within the course of an eight-minute span. They have also kept two sets of clean sheets in a row.

The guests are stranded in the center of the table in the meantime. For Dave Challinor’s team, the recent form is full of draws. Additionally, this season, the Dave Challinor-led squad has lost 55% of its League Two games. In their final league game, they had to settle for a point against Harrowgate. It ended in a scoreless tie.

At least two goals were scored in each of the host’s last three victories over the current guests at Sixfields Stadium.

It’s interesting to note that this season, Jon Brady’s team has won approximately 70% of their league games. Additionally, even league leaders Leyton have scored three fewer goals than Cobblers, the team with the most goals scored.

However, the visitors’ last five games have seen them in a very peculiar form. This contains victories, defeats, and draws in their most recent three games. Additionally, this season, they have given up thirteen times. As a result, we may anticipate Cobblers dominating this game.

The odds for our first prediction for this game are 2.20, and it is that Northampton will win. The host team has a three-game winning streak over Stockport at Sixfields Stadium. Not to mention the fact that they have recorded three straight clean sheets.

The next prediction is that there will be over 2.5 goals scored; the odds for this top are 1.95. At least three goals were scored in two of the previous four head-to-head matches.

Northampton vs Stockport – Head To Head 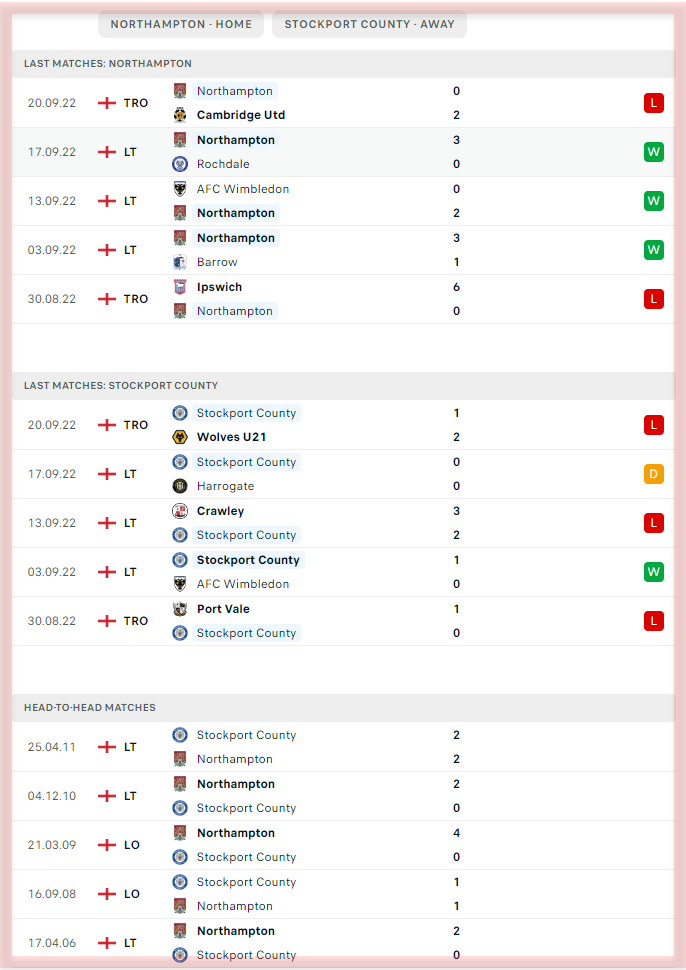