Northampton vs. Mansfield – Preview and Prediction

The first semifinal leg will take place on Saturday evening at One Call Stadium, with Mansfield Town favored due to their excellent home record throughout the regular season. Out of all the clubs in League Two, including the three automatically promoted sides, the team headed by Nigel Clough has the best home record.

They won 15, drew 4, and lost four of their 23 league games at home this season, scoring 40 goals in the process.

Mansfield, on the other hand, has showed glimpses of defensive vulnerability in recent weeks, with back-to-back 2-2 draws against the likes of Salford and Forest Green.

Northampton, whose players appear to have rediscovered their shooting boots at the close of the regular season, may find it difficult to keep things quiet at the back.

Three of the last four league matchups saw the visitors score at least three goals. Last weekend, they beat Barrow 1-3 on the final day of the tournament.

Mansfield Town likewise has a strong home record against Northampton Town, with nine victories, six draws, and only one defeat in 16 meetings at One Call Stadium.

Last month, these two teams faced off at One Call Stadium, with Mansfield coming out on top 1-0.
Only one of the previous five meetings between the two rivals resulted in three or more goals.

Mansfield Town are a powerhouse at One Call Stadium, and we expect them to take advantage of home advantage ahead of the rematch at Sixfields Stadium.
However, given Northampton Town’s previous form in the final third, we’ll also back the Both Teams To Score bet at 2.00 odds.

Northampton vs Mansfield – Head To Head 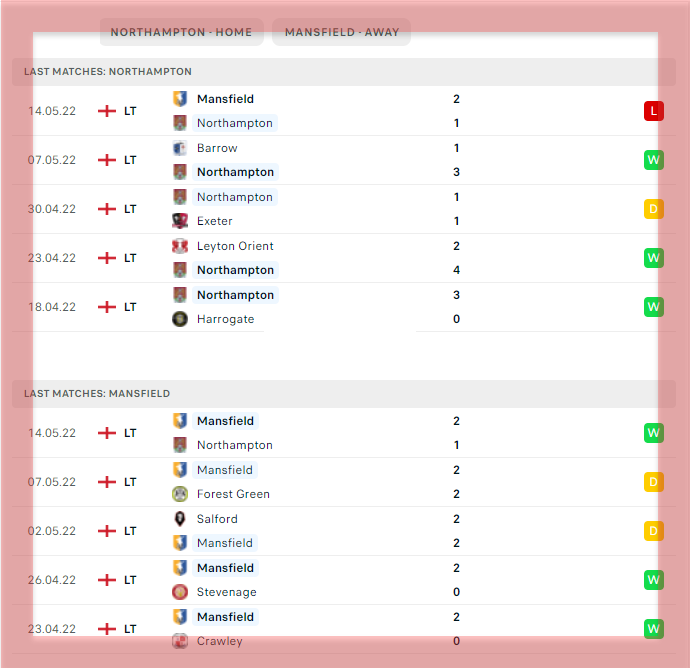