Norrkoping vs Elfsborg- Preview, and Prediction

Norrkoping’s win streak came to an end with their most recent defeat. They had won their previous four matches in a row before losing their final match. With only nine matches under their belt, Norrkoping has drawn one match and lost four others. Norrkoping’s improved performance in recent matches has allowed the team climb the table to tenth place with 13 points.

This season, Elfsborg has had a mixed bag of results in their games. The team has won four, drawn two, and lost three of the nine matches it has played thus far. With 14 points from their matches, their performance has placed them in seventh place. Elfsborg, on the other hand, has scored over 2.5 goals in all of their wins.

After their latest encounter against Goteborg, Elfsborg added another victory to their record. Elfsborg scored three goals in the encounter, while Goteborg only managed one, resulting in a 3-1 final score.

Norrkoping won the last h2h with a 3-2 FT score. Norrkoping and Elfsborg have each won two of the last seven head-to-head meetings.
In the last five home matches against Elfsborg, Norrkoping has not lost.

Norrkoping has been in good form in recent matches, with a four-match winning streak ending with their loss in the most recent encounter. They’ll be hoping to win this game and reclaim their winning mentality. Elfsborg has had a difficult season with uneven results, and they are only one point ahead of the hosts.

Norrkoping has won all four of their home matches, with the past three games being undefeated. Elfsborg has also played four games on their home turf and has only won one of them.

According to the statistics, Norrkoping will most likely win the match because they will be playing on their home turf. Both clubs have scored in past encounters and can be anticipated to do so again in this one. 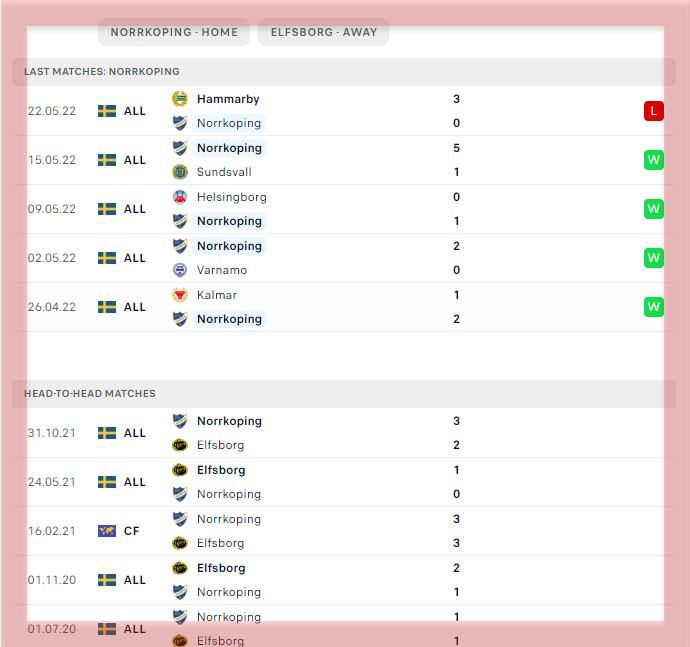