Nordsjaelland vs Vejle – Preview and Prediction

Nordsjaelland vs Vejle – Since the start of the relegation round, Nordsjaelland has had trouble getting wins in their games. Only two of the last eight games have ended in wins for the team. The teams have tied most of their games. In their last eight games, the team has won two, tied five, and lost just once. They have 32 points from their games and are third in the table for teams in danger of going down. SonderjyskE was the team that Nordsjaelland played in their last game. Both teams scored one goal, so the game ended in a tie (1-1 FT).

Even Vejle has had trouble winning games. Since the beginning of the relegation round, the team has won once, tied four times, and lost twice. The team is now in fifth place with only 23 points because of how badly they played. Based on where they are now, Vejle is one of the teams that will be sent down at the end of the season. With only two games left, it will be hard for Vejle to avoid relegation.
Viborg was the team Vejle played in their last game. Both teams scored two goals, so the game ended in a tie with a final score of 2-2.

The last head-to-head match was a scoreless tie. Both Nordsjaelland and Vejle have won one of their last five games against each other. Nordsjaelland hasn’t lost to Vejle at home in the last eight games.

In their most recent games, Nordsjaelland and Vejle both had trouble getting wins. Nordsjaelland has tied its last three games, while Vejle’s results have been all over the place.

Taking a look at the teams’ records, it seems likely that Nordsjaelland will win. Since both teams have scored, we can expect the game to end with more than 2.5 goals.

Nordsjaelland vs Vejle – Head To Head 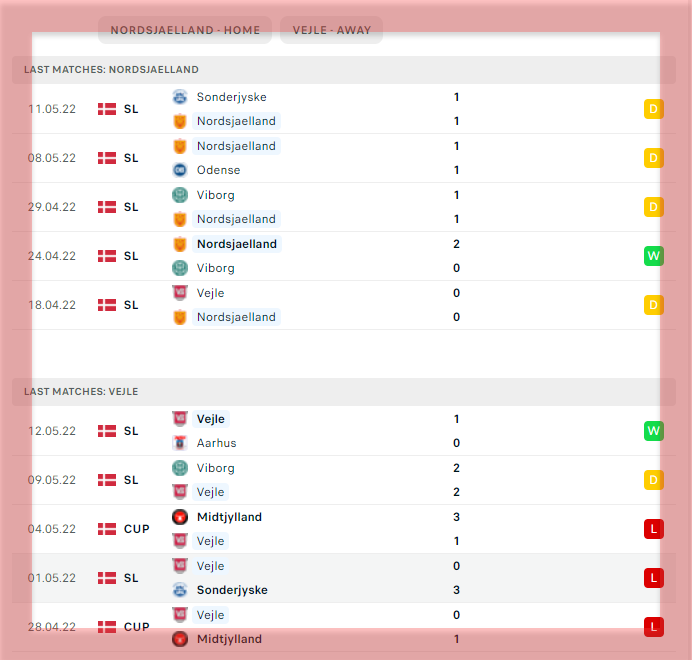