Nice vs Saint-Etienne – Preview, and Prediction

Nice vs Saint-Etienne – St Etienne, needing 5 points to escape the relegation zone, will travel to Nice on Wednesday. This matchup will take place at Allianz Riviera for Ligue 1. Nice is 6th with 60 points after 35 games. They won 18 games, drew 7 and lost 10. The hosts are equal with Strasbourg after the Federation deducted a point. They’ll be aiming for the top 5 and a European spot.

Last time out, Nice lost 1-0 to Nantes in the Coupe de France. The quantity of null scores has been a recent trend. In their previous 6 meetings, 5 of them were losses for a bet on both teams scoring. St Etienne, on the other hand, is 18th on the standings with 31 points. They won 7 league matches, drew 10 and lost 18. Their defensive issues have also been a hindrance, as they have let in 70 goals thus far.

St Etienne will not want a repetition of their 2-0 league loss to Rennes. Expect a few goals, since their last 7 games have concluded with 2 or more goals. After two losses, they need a win to get out of the rut. Nice has won 5 games in a row in the league. The hosts have scored in their last 5 home games. St Etienne haven’t won away from home in 5 league games. They also lost the last h2h game without scoring. 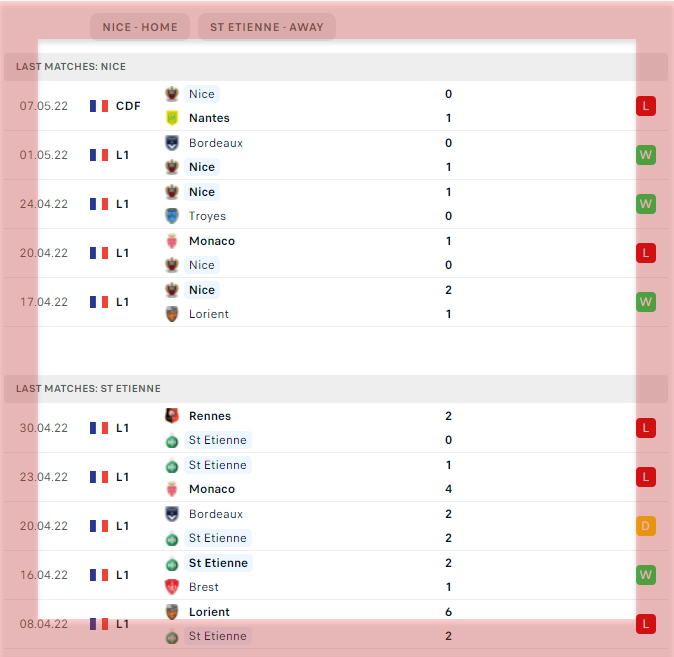