Newport vs Carlisle – Preview, and Prediction

Newport vs Carlisle – Newport has had a terrible past two weeks. They could, however, reverse course this weekend when they host an erratic Carlisle.

This season, there are 6 points separating the two teams. The home team is now on a three-game league losing streak after suffering a 0-2 home loss to Barrow in the previous encounter.

The host’s games have lost 75% of the time, which is unexpected. Only 7 of the potential 27 points have been won by them. Additionally, they have dropped two of their last three games by a score of 2-0.

Carlisle is also moving in the same direction as the hosts as they stroll. They did triumph over AFC Wimbledon in their previous game, 2-1. This snapped the team’s two-game losing streak.

Notably, they had lost five of their previous seven league games. Over the span of these games, they had also had two distinct 3-game and 2-game winless streaks.

For the home team, the recent performance is extremely worrying. In their last 6 home games, they have dropped 4 of them. However, the visitors have yet to triumph on the road this year.

It is interesting to note that both clubs have a similar record for goals allowed in the last four games played at their respective venues. The visitors currently have a bad road record. Also keep in mind that they have not defeated Newport when playing away from home. All things considered, we predict that Newport, the hosts, will triumph on Saturday at Rodney Parade.

Newport vs Carlisle – Head To Head 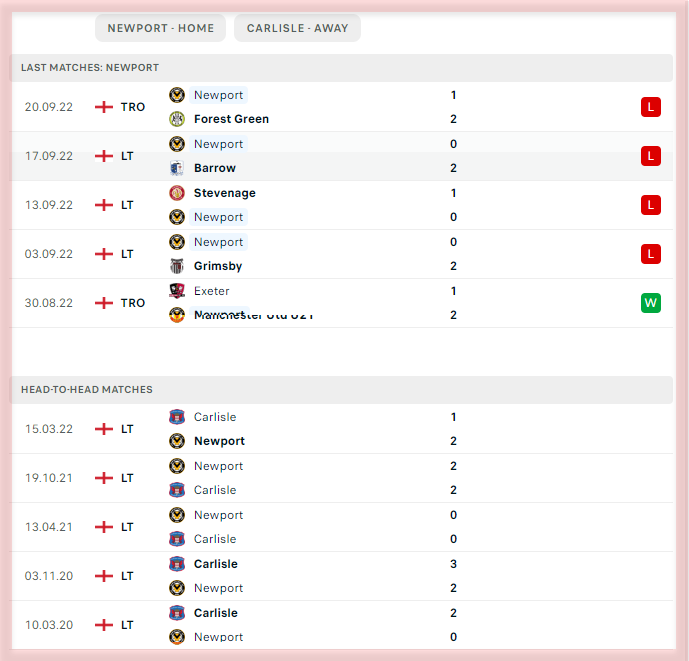