Newcastle vs Aston Villa – Newcastle has been playing absolutely fantastic lately, and as a result, they are in the running for a top-four berth. With the aid of their affluent owners, they intend to take over.

Due to the firing of their coach, Aston Villa is going through a period of change and has little chances. They are ranked 15th out of 20 teams, only three points above the cutoff for relegation.

They have only been able to win three games thus far, one of which was against the struggling Southampton. Additionally, they are still without their first road victory of the year, which is a severe issue that requires immediate correction.

They actually have a 100% losing record, with just two draws. In the entire league, only two teams managed to score fewer goals than them in these games. Newcastle, who are now ranked fourth in the standings, only needs an additional two points to move up to the podium.

They have been in excellent form recently and have just suffered one loss throughout the current PL season.  This one defeat came against Liverpool at Anfield. And eight minutes into the game’s extra time, the game-winning goal was scored.

Another thing that tips the scales in their favour this weekend is their unblemished home record.  In fact, with the exception of three draws, they have a perfect winning record at home. According to appearances, Newcastle should triumph at home.

Newcastle prevailed 1-0 in the most recent match. They have not lost at home since 2005. In two of the previous four matches at this stadium, they recorded clean sheets.

It has been 15 years since the guests last won at this field. The most recent gameday, Newcastle defeated Tottenham 1-2 on the road, bolstering their confidence.

In fact, they managed to defeat neither of the Manchester teams, scoring three goals even against the defending champions City. However, Villa has struggled to win this PL season and has consistently conceded a lot of goals.

Additionally, even from the previous season, their road performance has been concerning. At this stage, expect Newcastle to record the three points this weekend. Expect a flurry of goals to be scored against Villa’s porous defence. 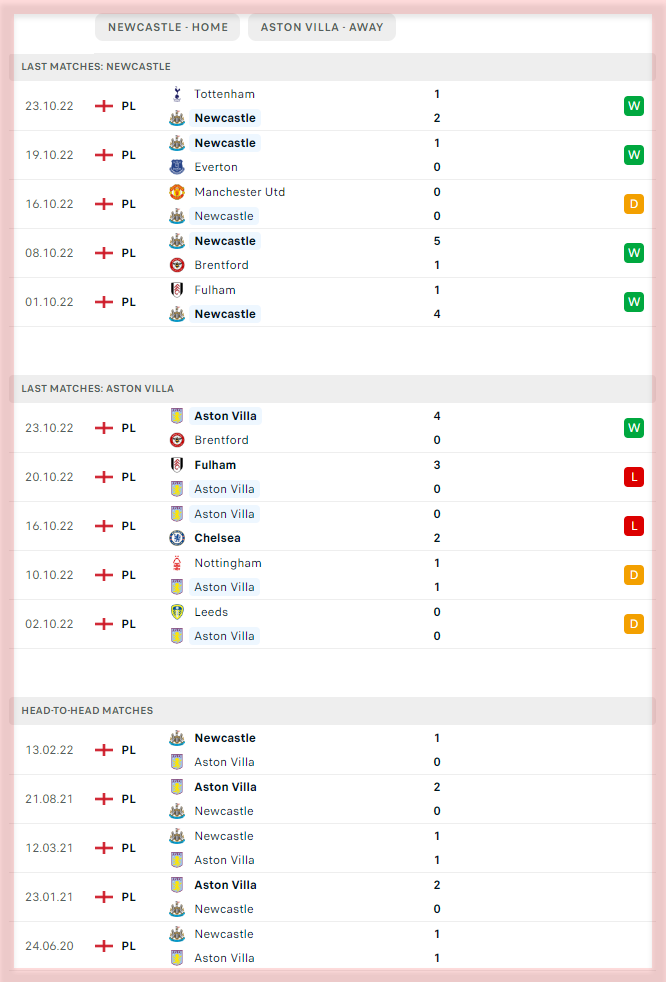