Newcastle vs Arsenal – Preview, and Prediction

Newcastle vs Arsenal – Arsenal is now up against a difficult task. After several seasons, they were on track to qualify for the Champions League and finish in the top four.

However, their loss to arch-rivals Tottenham has taken away their lead with only two games remaining. To compete in Europe’s biggest league next season, they’ll have to come up with something spectacular.

However, not all is lost just yet. They’ve put on some fantastic performances this season, and now they’ll have the confidence and resolve to not let all of their hard work go to waste.

They will have to go through the resurrected Newcastle, who are looking to make an impact in the English Premier League.

They’ve been on a roll since the beginning of the year. Their few defeats have come against some of England’s greatest teams.

This will undoubtedly be an intriguing fixture. Arsenal is anxious for a win since their Champions League hopes are on the line. Meanwhile, the Magpies can gain notoriety by denying the former Invincibles a place in the UCL.

Newcastle did lost 5-0 to Manchester City on the road the other day. However, because they were the defending champs, they get a pass. In reality, they had won four of their previous six games overall and six of their previous seven home games.

The Gunners, on the other hand, were defeated 3-0 by Tottenham on the road last week. They were on a four-game winning streak before to it. It’s also worth noting that they’d won five of their previous eight road trips.

Taking these insights into account, as well as prior scorecards, expect plenty of goals between the two clubs on Monday.

The Gunners are the only team in the competition to have won four of their past five games, along with Manchester City and Liverpool. 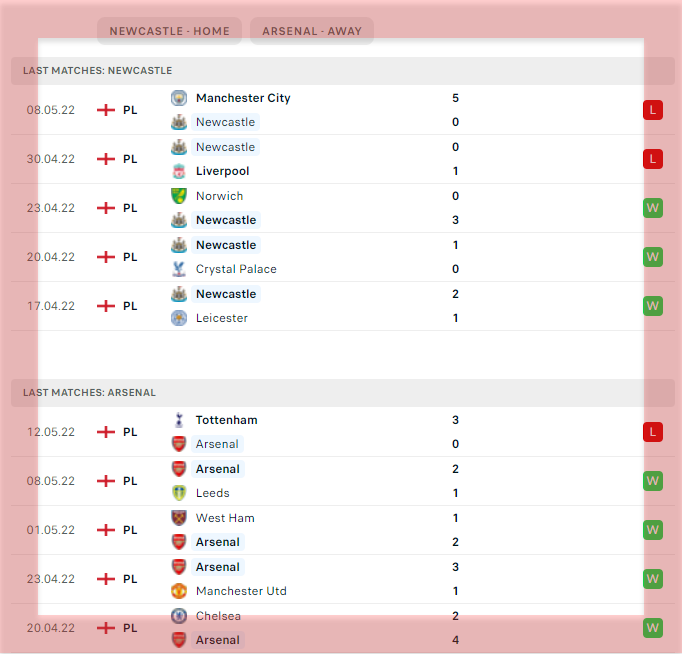