Netherlands vs Belgium – Preview, and Prediction

Netherlands vs Belgium – After defeating Wales 3-2 in the Nations League, the Netherlands will be seeking another triumph. In that game, Netherlands controlled 60% of the possession and 7 out of 22 shot attempts were successful.

The Netherlands has recently struggled to retain clean sheets, but they have also discovered ways to score from their own opportunities. Looking at their previous six games, Netherlands has suffered defensively in six of them while scoring goals in six of those games.

It will be interesting to observe if this pattern continues. Belgium will enter the match riding high after defeating Poland 0–1 in their previous Nations League match.

In that game, Belgium controlled 69% of the possession and 4 of its 12 shots on goal were successful. In the sixteenth second, Michy Batshuayi scored for Belgium. Poland, on the other hand, made 11 attempts at goal, only one of which was successful.

Belgium has scored a total of 14 goals on their own throughout the course of their last six games. Additionally, Belgium has been successful in scoring in each of those contests. They have witnessed 8 goals scored by their opponents during that time.

Louis van Gaal, the manager of the Netherlands, can choose from a fully injury-free group, thus he has no concerns about his team’s condition going into this game.

The manager of Belgium, Roberto Martnez, doesn’t have any concerns about his team’s physical condition going into this matchup because the entire roster is healthy and available to choose from.

We get the impression that Belgium will need to play well if they hope to score against this Netherlands team, who we believe should be able to score one goal on their own in a successful performance. As a result, we observe a closely contested match that ends with a 1-0 victory for the Netherlands.

Netherlands vs Belgium – Head -to- Head 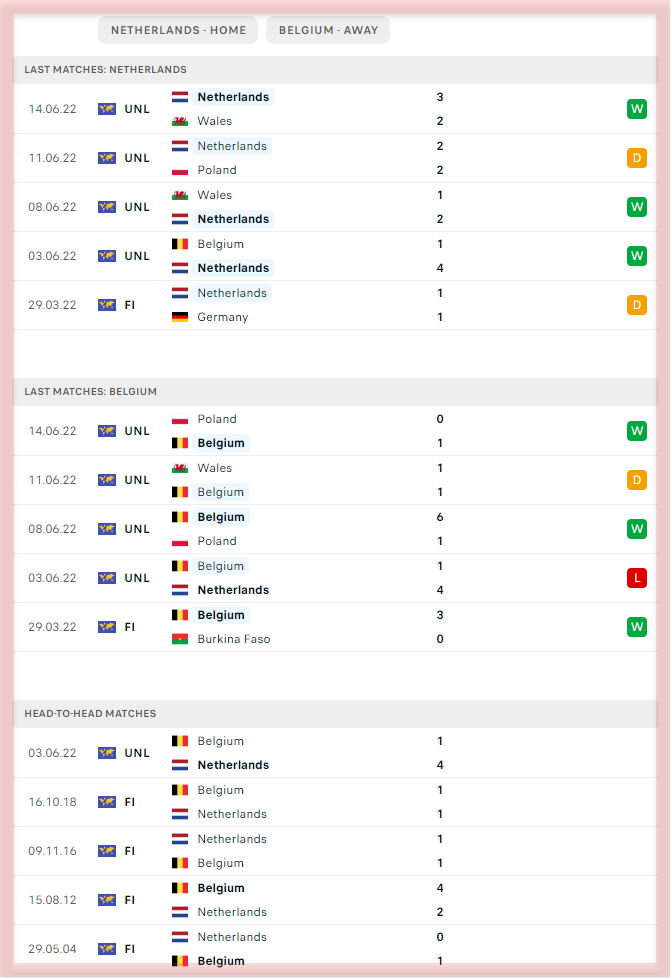