NEC Nijmegen vs Ajax – On Saturday afternoon, Ajax will travel to Goffertstadion to face NEC Nijmegen in the 30th round of the Eredivisie, looking to bounce back from their loss to PSV in the KNVB Beker final.

Last Saturday, Erik ten Hag’s side had two goals disallowed against PSV, but it was not their greatest performance overall. Ajax, on the other hand, has won five consecutive games in the domestic league, extending their lead over second-placed PSV to four points after PSV’s 3-3 draw at Twente three weeks ago.

Ajax will be looking to keep their winning streak going against NEC Nijmegen, who have lost three of their past five Eredivisie games. NEC is currently in the centre of the league table, with little room for improvement in the next five rounds.

Throughout the season, the club led by Rogier Meijer has fared much better on the road than at home. As a result, they will enter this encounter against Ajax having lost 10 consecutive league matches in their own backyard.

In their past five league games at Goffertstadion, they have only scored two goals. With 15 goals conceded in 29 matches so far this season, Ajax has by far the greatest defence in the division. As a result, it wouldn’t surprise us if the hosts struggled to create chances on Saturday.

The talent difference between the two clubs is enormous, and we expect Ajax to cruise to their sixth consecutive Eredivisie victory on Saturday.
At 2.35 odds, you can support the visitors to win by three or more goals difference, while at 2.10 odds, you can back Ajax to beat NEC Nijmegen to nil 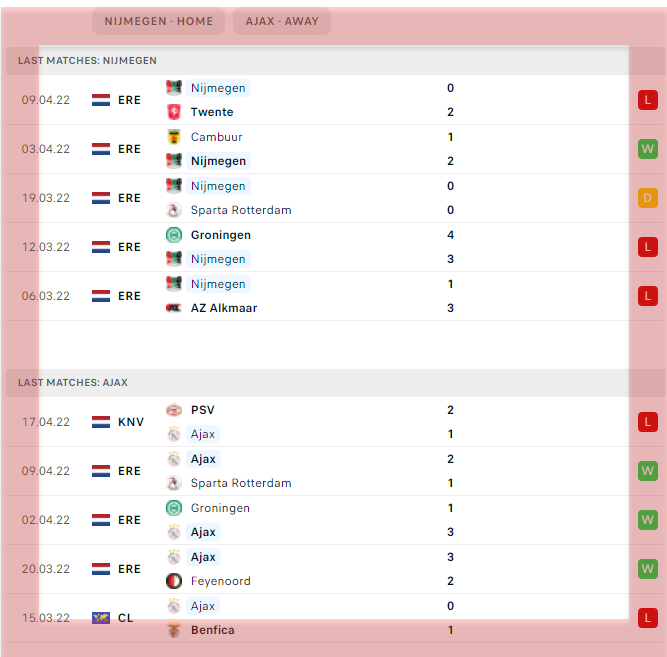