Nashville vs Montreal – Preview, and Predictions

Nashville vs Montreal – Montreal climbed to the top of the Eastern Conference standings with a 2-0 win over Charlotte FC, who were making their debut.

Djordje Mihailovic increased his MLS goal count to six this season by breaking the deadlock shortly before halftime at Bank of America Stadium, with right full-back Alistair Johnston scoring the game’s last goal midway through the second half.

The Canadians have now won six games and drawn one in the last seven rounds, making them the league’s hottest team. They also have the greatest offensive record in the East, scoring 22 goals in 11 games this season.

On Wednesday evening, when Wilfried Nancy’s team travels to GEODIS Park to face Nashville in one of the most intriguing ties of Matchday No. 12, it will be very interesting to see if they can continue their incredible run of form.

Despite only playing two games at home since the start of the season, Nashville is tied for sixth place in the West with the Houston Dynamo and Colorado Rapids.

They came away with four out of six points from these two games, surrendering only one goal (a 1-1 draw to the Philadelphia Union and a 2-0 win over Real Salt Lake).

However, the club coached by English manager Gary Smith will be coming off a 2.0 setback to the Houston Dynamo.

In the short history of this rivalry, Nashville has been the dominant force. In five meetings with Montreal, Nashville won three and drew two.

Three or more goals were scored in only one of these five head-to-head matches. Despite having an additional man on the field since the 35th minute, when the hosts’ Adam Lundqvist was sent red, Nashville looked dreadful in a 2-0 loss to the Houston Dynamo over the weekend

Nashville vs Montreal – Head to Head 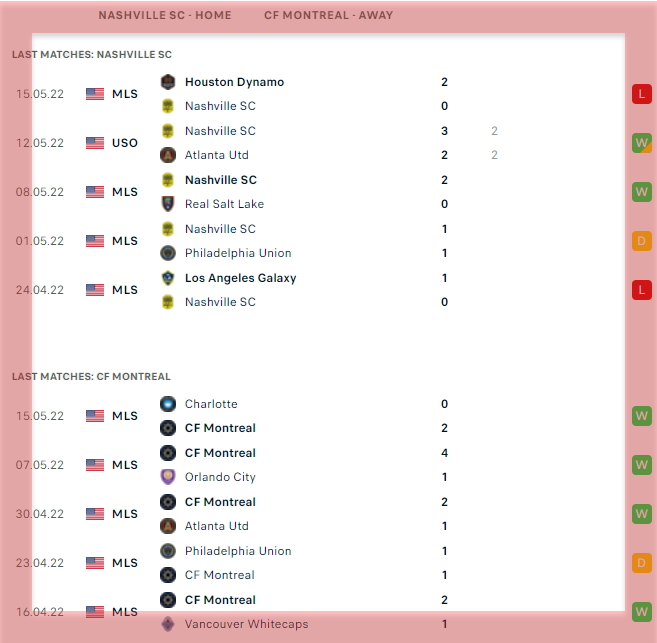