Nashville is currently in sixth place in the Western Conference with 18 points from 12 games. They won five times in the league, drew three times, and lost four times. Their overall goals to conceded ratio is 13:13, indicating that they are prone to conceding frequently.

The hosts will be looking to build on their 2-1 MLS victory over the Montreal Impact last time out. They’ve been outscored in five of their past six games, allowing eight goals in the process.

Atlanta United, on the other side, is in seventh place in the Eastern Conference with 15 points. They won and lost four times apiece in the 11 games they played, while drawing three times. They are now in the Round of 8 Playoffs and have gone two games without losing.

Atlanta United tied 2-2 with the New England Revolution in their most recent match. A least of three goals have been scored in each of their last six games, with the average amount of goals scored per match by this visitors being 2.67.

In their last seven MLS head-to-head meetings, both teams have won twice. They met earlier this month in the US Open Cup, with Nashville winning 3-2 in extra time. Both teams have scored in four of their last five encounters.

Nashville has recently relished playing at home, going undefeated in three games. They also haven’t lost a game at home this season. The hosts have won three consecutive home games in various competitions, including a 3-2 victory against this opponent earlier this month.

Meanwhile, Atlanta United has lost their last four road games in a row in various tournaments. The visitors have struggled on the road this season, losing four of their last five league away games.
Expect the hosts to win this Sunday, based on the current situation. 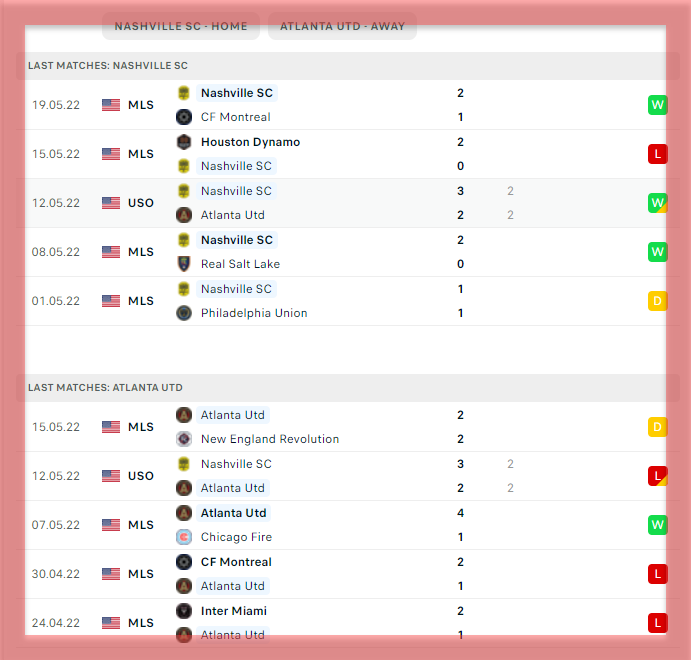