Napoli vs Genoa – Preview, and Prediction

Napoli vs Genoa – Napoli are just two points away from guaranteeing a top-three finish in Serie A (SA), but the fans are refusing to accept the disappointing finale to a season in which they lead the league after 13 of the first 27 matches. Eggs were thrown at the squad bus ahead of their final home game, and a banner demanding manager Luciano Spalletti’s resignation, highlighting fan dissatisfaction with the club’s failure to win the Scudetto for the first time since 1990.

Genoa boosted Napoli’s prospects of finishing in the top three by overcoming Juventus 2-1 last time out, but they are still fighting for their lives and may not extend those courtesy on this trip. Even if ‘Il Grifone’ wins successive SA games for the first time since February 2021, the relegation race is so fluid that they could finish anywhere from 17th to 20th after this round.

Genoa will need to put in a massive effort to stay alive, but the visitors haven’t won a SA away H2H since February 2009 (D4, L8), and their chances of snapping the streak are slim, as Genoa is winless in 16 SA away games (D8, L8). They’ve also failed to score in six of their past seven road matches.

While everyone will be talking on Lorenzo Insigne’s farewell to the home fans, Victor Osimhen has scored Napoli’s first goal in eight of his ten SA appearances, keeping his record unblemished (W7, D1). Mattia Destro has recently played a same role for the visitors, scoring Genoa’s first goal in his last five SA appearances. In away matches this season, Genoa has surrendered a league-high seven match openers in the first 15 minutes. 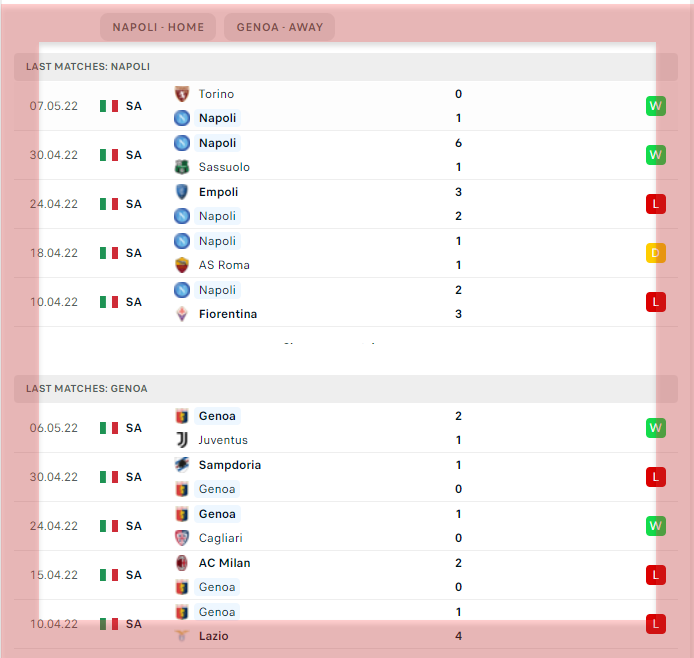