Napoli vs Fiorentina – preview and prediction

Napoli vs Fiorentina – Napoli took advantage of AC Milan’s unexpected slip-up in Monday’s goalless draw with Bologna to close the margin at the top of the Serie A standings to just one point.

After the international break, I Partinopei enjoyed a huge 1-3 victory over Atalanta. Luciano Spalletti’s men were looking for Lorenzo Insigne, Matteo Politano, and Elif Elmas on this occasion.

Napoli is on a three-game winning streak, with each victory resulting in at least two goals. They are no longer competing in any cup competitions, allowing them to concentrate solely on the title race in the last seven rounds of the season.

Next up for Spalletti and his team is a trip to Naples, where they will face Fiorentina, who have won their past four league games. Last time out, Viola defeated Empoli 1-0 at Stadio Artemio Franchi. They dominated the game for the majority of the time and rightly won the game in the second half courtesy to Nicolas Gonzalez’s goal.

Vincenzo Italiano may be pleased with his defensive line’s recent performance, as Viola has only conceded one goal in their last three league games.

It will be fascinating to see how Fiorentina’s defense handles Napoli’s in-form assault, especially considering Fiorentina has a habit of putting on much better performances at home than on the road in this season’s Serie A.

Fiorentina stunned Napoli in the Coppa Italia last 16 round in early January, scoring five goals in a 2-5 victory at Stadio Diego Armando Maradona (they scored three goals in extra-time).

Napoli had won three straight games against Fiorentina prior to this defeat.

When it comes to the Scudetto battle, Napoli can’t afford to make mistakes at home, especially against Fiorentina, who have only won 5 of their 15 away games this season.

At 1.75 odds, we believe there is value in betting the home team to win. At 2.50 odds, we’ll support the hosts to keep a clean sheet.

Napoli vs Fiorentina -Head -to- Head: 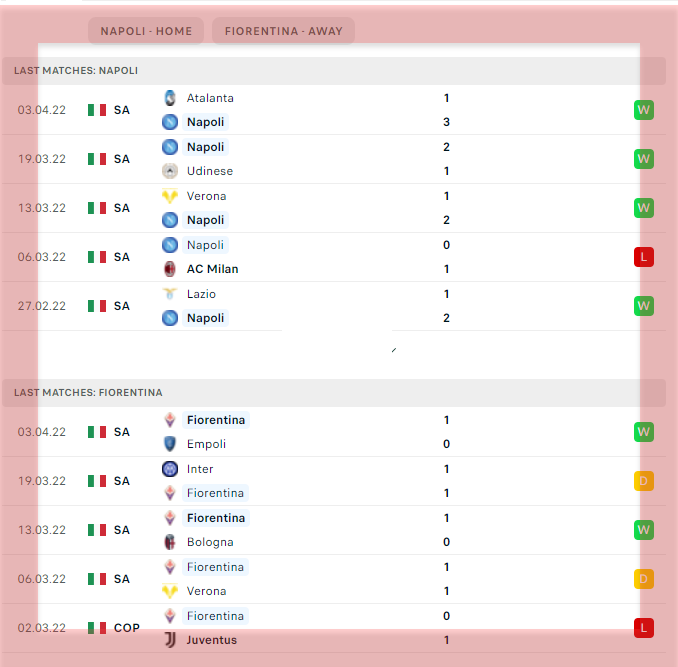