Nantes vs. St Etienne- On Saturday evening, Saint-Etienne will go to Stade de la Beaujoire – Louis Fonteneau to face Nantes in the 38th round of the league, hoping to prevent relegation from Ligue 1.

Saint-Etienne and Metz are now tied on points, however only one of these two clubs can qualify for the relegation playoffs, while the other will be relegated to Ligue 2.

Metz is on the road against PSG, therefore a draw in Nantes on Saturday would almost certainly put Saint-Etienne in the relegation playoffs.
However, there isn’t much to imply such a scenario on the final day because Saint-Etienne hasn’t been uprooting any trees recently.

After four straight losses, Les Verts will head to Stade de la Beaujoire – Louis Fonteneau. The most recent came last weekend at home against Reims, when the team led by Pascal Dupraz squandered a golden opportunity to keep their playoff hopes alive.

Nantes, on the other hand, has nothing to play for, but they’ve been scoring goals for fun recently and will come into the game in a much better mood.

Nantes just trounced Nice in the Coupe de France final and then stunned Rennes in Ligue 1, therefore eliminating Rennes’ prospects of catching one of the UEFA Champions League places.

The draw has been the most common result in this matchup’s history, occuring 14 times in the previous 34 head-to-head matches between Nantes and Saint-Etienne.
Nantes took the lead in the first half of the season with a 1-0 victory at Stade Geoffroy-Guichard in December of last year.

Only one of the previous four head-to-head meetings between these two teams saw both teams score.

While losing 3-2 to Lyon last weekend, Nantes has scored two or more goals in five of their previous six games in all competitions, despite facing a difficult schedule.

Saint-Etienne had lost four games in a row entering the last day, and they had conceded at least two goals in seven of their last eight Ligue 1 matches. In a high-scoring encounter, we’ll opt for the home win. 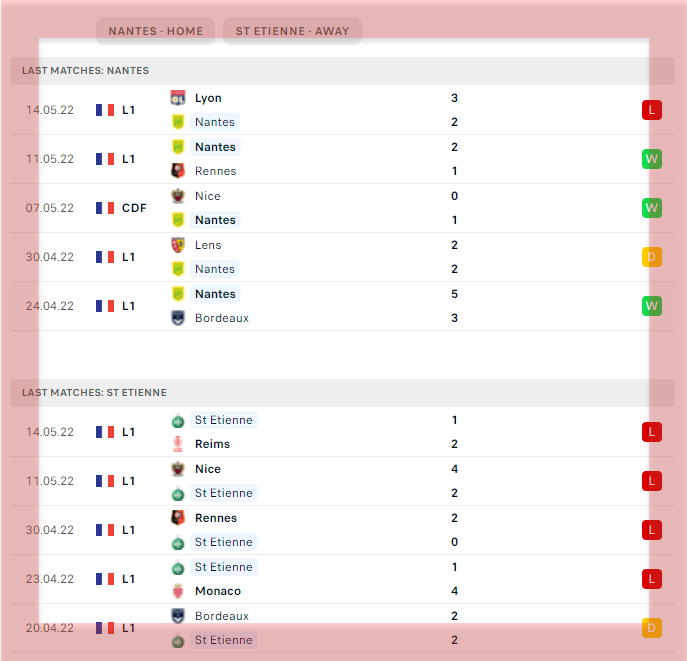