Nantes vs Rennes – Preview, and Prediction

Nantes vs Rennes – Rennes, with 11 points and a 4 point advantage, will travel to Nantes on Wednesday for the season’s last game at Stade de la Beaujoire.

Rennes is 4th with 62 points after 35 games. They won 19 games, drew 5 and lost 11. They will aim for the third slot in the Europa League group stage since it offers a UCL qualification ticket. They are second only to PSG in goals scored this season.

Rennes come into this game after a 2-0 Ligue 1 win against St Etienne. It’s possible we’ll see a few goals tonight, given their last 11 games have seen 2 or more goals. Nantes, on the other hand, is ranked 9th with 51 points. In the league, they won 14 games, drew 9 and lost 12. They have struggled defensively, conceding sloppy goals, but have been solid offensively, scoring 50 goals thus far.

Nantes will be hoping for a repeat performance after a 1-0 Coupe De France win over Nice. The hosts are eager to maintain winning against Rennes, having only lost once in their last five.

Rennes hasn’t beaten this opponent away from home in 2 league games. They can score easily while they are away from home. They have scored in their last 5 road games.

In the last 4 league meetings, Nantes hasn’t beaten this opponent. But they have won their last two home league games. We predict the visitors to win on Wednesday based on their outstanding h2h stats. 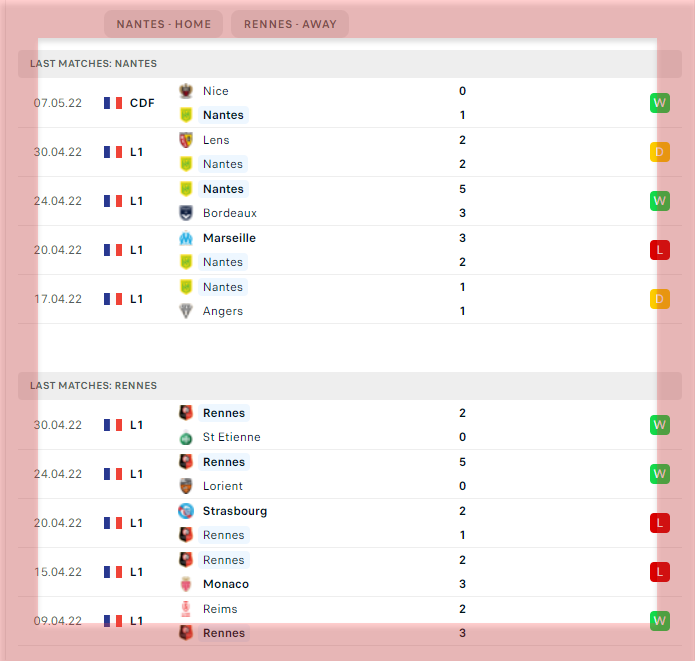