They were able to finish the previous season in a secure zone since they frequently recorded victories. Additionally, they have been performing well in their most recent appearances in a variety of tournaments.

St. Patrick’s Athletic, meanwhile, has been playing well from the start of this Premier Division season. They are now in fourth place in the league table thanks to their successful season.

However, their recent performance hasn’t been all that strong. They both used the aforementioned forms to qualify for the upcoming Europa Conference League season by entering the first leg quarterfinals.

In the first leg, St. Patrick’s had the home field advantage. However, they were unable to outscore their opponents, and the game ended in a 1-1 draw.

We can observe Mura putting up strong performances in their previous rounds of the competitions for the next Europa Conference League season.

They have a perfect record in all three, including the first leg’s 1-1 tie with St. Patrick’s. They also maintain a strong record at home. They are winning primarily at home. Several of these victories had high final scores.

St. Patrick’s Athletic, on the other hand, hasn’t been consistent lately. They have failed to win in four of their last five games across all leagues.

At the moment, St. Patrick’s Athletic’s road performance is not spectacular. They are currently playing away from home and have lost their last four games. 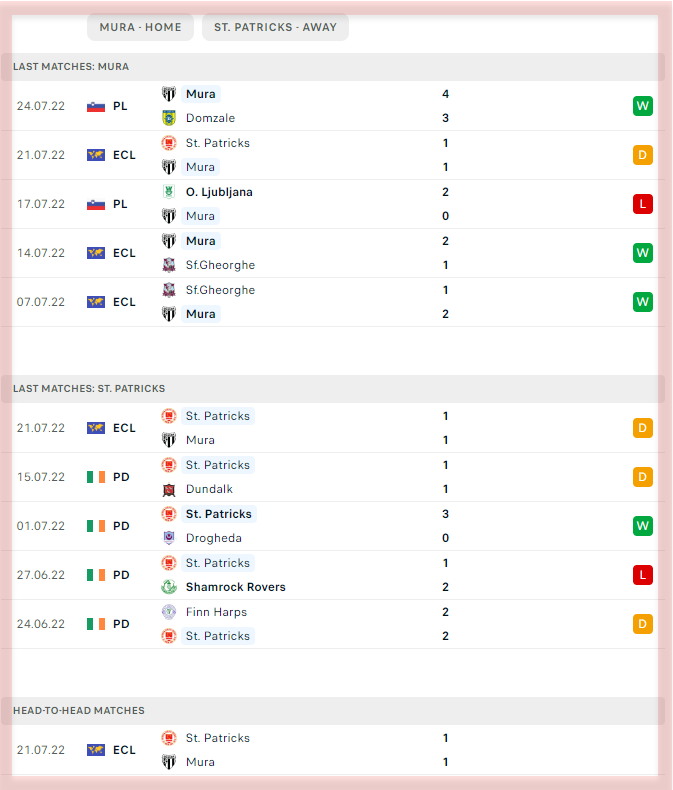