Morocco vs DR Congo – DR Congo has not qualified for the championships since 1974, whereas Morocco will be seeking to qualify for the finals for the second time in a row when they host the visitors at Stade Mohamed V after their first meeting at Stade des Martyrs.

Morocco had an undefeated run in the second round, winning Group I. They won all six games, scoring 20 goals in the process while allowing only once. They were unable to repeat their success at the AFCON in Cameroon, as they were eliminated in the quarter-finals by Egypt.

However, they have only won two of their 11 meetings with Congo DR, with their most recent triumph coming in a friendly match in 2006.

DR Congo did not compete in the AFCON in January and lost a friendly 1-0 to Bahrain in their most recent appearance last month. They fended off Benin’s challenge to finish first in Group J, with 11 points from six games.

Morocco performed admirably at the AFCON earlier this year and will be hoping to keep up the good work. The visitors, who did not compete in the AFCON, have been preparing for this game for a long time and should be able to hold their own here.

The Moroccans, on the other hand, have gone undefeated in 42 of their last 43 games. They’ve also won their previous three games at home, keeping two clean sheets along the way.

Morocco appears to have a good chance of winning the second leg if they can take a lead or even a draw in the first. 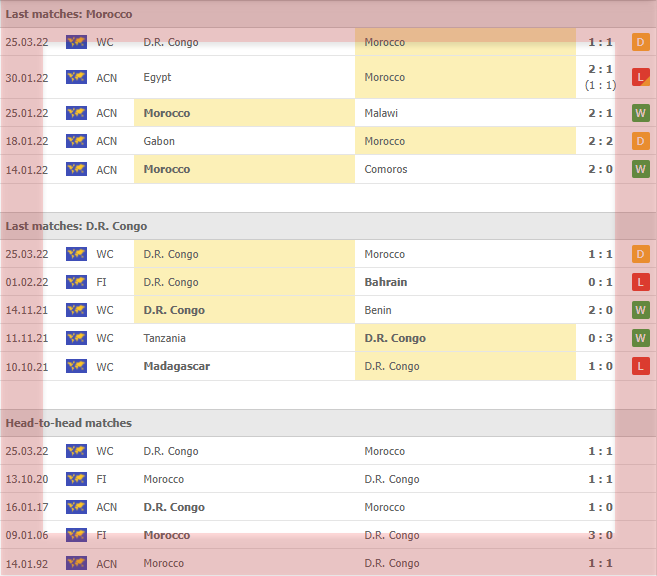