Moreirense vs Vizela – Preview and Prediction

Moreirense vs Vizela – Moreirense needs to win this game at home to stay in the Primeira Liga. They have lost their last three games in a row. This Saturday, Vizela will play against the hosts at Parque Joaquim de Almeida Freitas.

With 33 points from 33 games, Vizela is 14th in the standings. In the league, they won seven games, tied 12 games, and lost 14 games. Since they have already left the drop zone, there isn’t much for them to do here. They have given up a total of 54 goals, so their defense should get better for next season.

The visitors’ 1-1 draw at home against Maritimo was good enough to keep them in the Primeira Liga for another season. In their last six games, they have all given up goals, for a total of nine.

On the other hand, Moreirense has 26 points and is in 17th place in the table. Out of the 33 games they played, they won six, tied eight, and lost 19 times. The home team’s attack has been one of the worst this season, as they have only scored 29 goals. Because of this, they are now in danger of being kicked out of Liga Portugal 2.

After losing 1-0 at Estoril last Saturday, Moreirense has lost three games in a row. Their only chance of staying in the league is to take the Play-off spot from Tondela above them. The fact that they beat Tondela 2-0 here last month shows that they might have a chance against Vizela.

Moreirense has lost five of their last six home games, and they have only won four of their 16 home games this season. But they won the game they played against them 4 months ago.

Vizela, on the other hand, have lost their last two league games away from home. They are safe for this season, and they don’t do that well on the road.

We could see the away team taking their foot off the gas because they want this season to be over, which the home team could take advantage of. So, we think it’s likely that the home team will win this weekend.

Moreirense vs Vizela – Head To Head 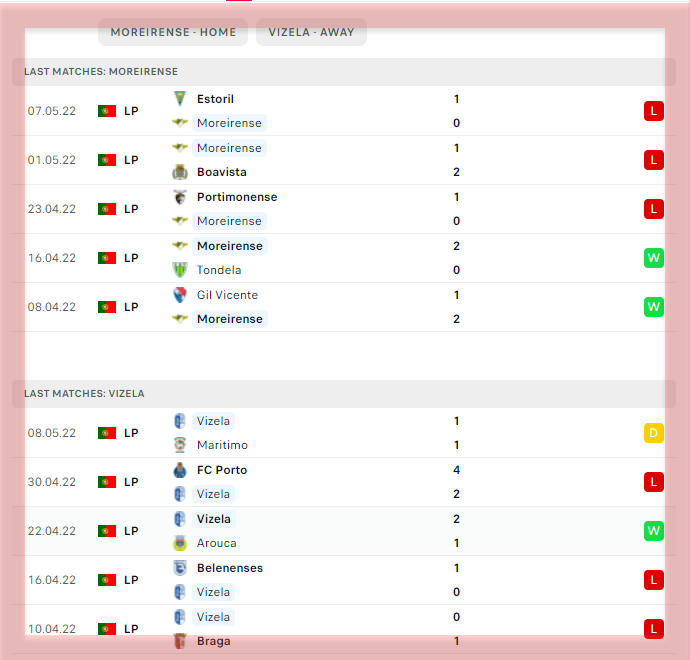