Morecambe vs Cambridge – Preview, and Prediction

Morecambe vs Cambridge – Cambridge will strive to regain the winning momentum after two straight losses. They will go to The Mazuma Stadium to face Morecambe, who are currently in last place.

This season, the hosts are falling apart. They are only three points higher than the table’s foot. Farrend Rawson deserves all the accolades for scoring the game-winning goal against Forest Green in the final seconds. This is the host’s first triumph of the current campaign.

Derek Adams, the manager, will probably also try to capitalize on the visitors’ two-game losing run.

In their most recent encounter, the visitors lost to Barnsley by a score of 3-0. Four of Mark Bonner’s team’s shots were on goal, but they fell short of scoring. They are currently ranked eighth in the league.

The guests are going through a challenging time as well. Their most recent victory came on September 3rd against Lincoln City. They have only won one game this season, but they still have a chance to rally against the current hosts.

In their last two games, the guests have given up five goals. They also have the only negative goal difference among the top ten teams.
It should be emphasized that the hosts have only triumphed once this year. Additionally, it was Forest Green, the club on the bottom.

Additionally, the visitors are scoring goals at a respectable rate in their games this month. Since all of the goals for the visitors have been scored by just two players.

Our prediction is that Cambridge United will win 2-1, with a 10.00 odd. This is after taking into account that the host has won two of the last three games by an exact score of 2-1. In addition, our next prediction is Both Teams to Score at 1.80 odd for this game. In three of the previous five head-to-head games, both teams have scored.

Morecambe vs Cambridge – Head To Head 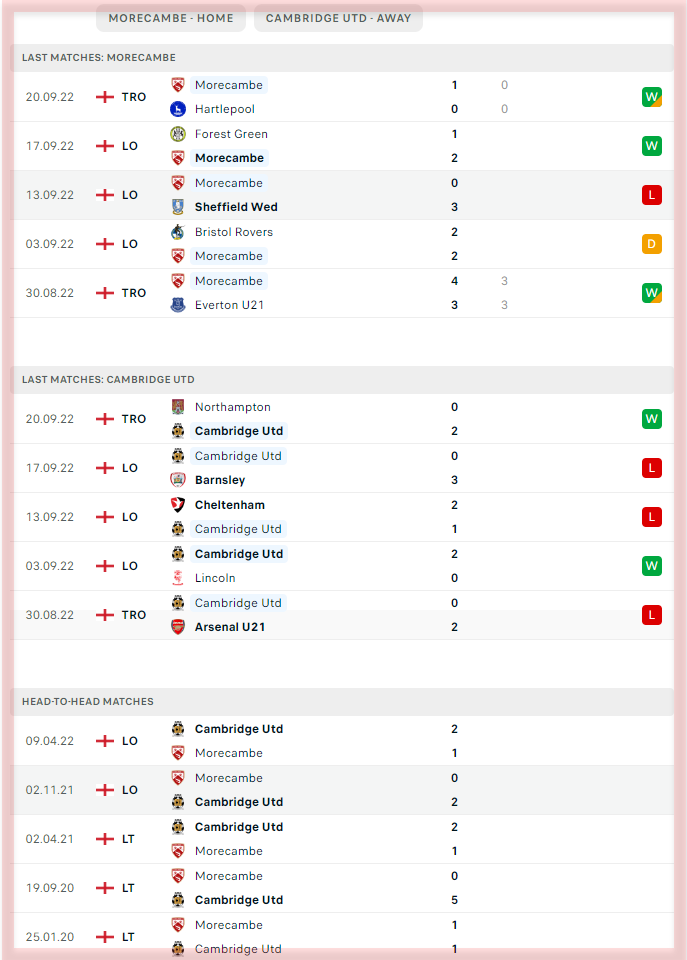