Montreal vs Real Salt Lake – Montreal is currently in third place in the Eastern Conference with 20 points from 12 games. In the league, they won six times, drew twice, and lost four times. The home club only needs two more points to reach the top of the table, since they are now tied for second position with New York City.

The hosts will not want a repetition of their last encounter, which ended in a 2-1 MLS setback at the hands of Nashville. They’ve given the opposition very little, scoring only four goals in their last six games.

Real Salt Lake, on the other hand, is in fifth place in the Western Conference, with 19 points. In the league, they won five times, drew four times, and lost three times. They are now in the Round of 8 Playoffs, but their defense needs to be adjusted because they have been scoring against too often.

Real Salt Lake will enter this match after a 2-1 league win over Austin FC in their previous match. They have failed to score in three of their previous five games, indicating that things are not going well for them in front of goal.

Since the last five head-to-head meetings, CF Montreal has gone undefeated against this opponent. Real Salt Lake last won a head-to-head match in 2014. Both teams have scored in each of their last five league encounters.

The Montreal Impact are on a roll, having won their past three home games in a row. It’s probable that we’ll see a few goals tonight, since their last 11 games have all finished with two or more goals.

Meanwhile, Real Salt Lake has lost all five of their previous meetings with this opponent. Furthermore, they have only won once on the road this season.
Knowing this, we anticipate a home victory on Sunday. 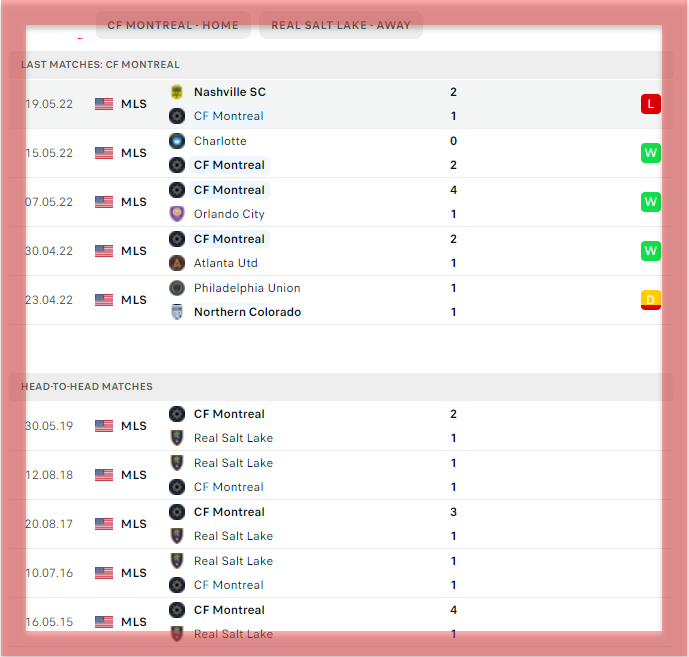