Monchengladbach vs Hoffenheim – Preview, and Predictions

Monchengladbach vs Hoffenheim – On Saturday afternoon, when Monchengladbach hosts Hoffenheim in the final round of the 2021/22 Bundesliga season at Stadion am BORUSSIA-PARK, we have plenty of reasons to expect goals galore. In recent weeks, neither club has been able to play good defense while also being good on the offensive end. We can’t foresee a low-scoring scenario when the two teams meet in what will most likely be a joyous environment at BORUSSIA-PARK, especially because the last game of the season brings no drama for either team.

Mponchengladbach will be in a better mood for the tie. They have gone undefeated in their last three league games. In their previous encounter on home soil, Adi Hutter’s side defeated RB Leipzig 3-1. They held the lead against Eintracht Frankfurt last Saturday, but had to settle for a 1-1 draw at Deutsche Bank Park.

Only a month ago, Hoffenheim was a legitimate contender for the Champions League. However, they fell into a major slump and went on to lose eight consecutive league games. This dreadful run has dropped them to seventh position in the Bundesliga standings. They can only finish ninth, but it will be fascinating to watch if Sebastian Hoeness can drive his team to a win on the final day at BORUSSIA-PARK.

Goals are written all over this game. When you combine the lack of sufficient motivation for both teams with their generally attacking-minded approaches, the Over 3.5 goals FT appears like the best bet at 1.57 odds. In terms of the outcome, we like the 2.00 odds offered for Monchengladbach to win, given that they recently defeated Champions League aspirants RB Leipzig 3-1 at home. 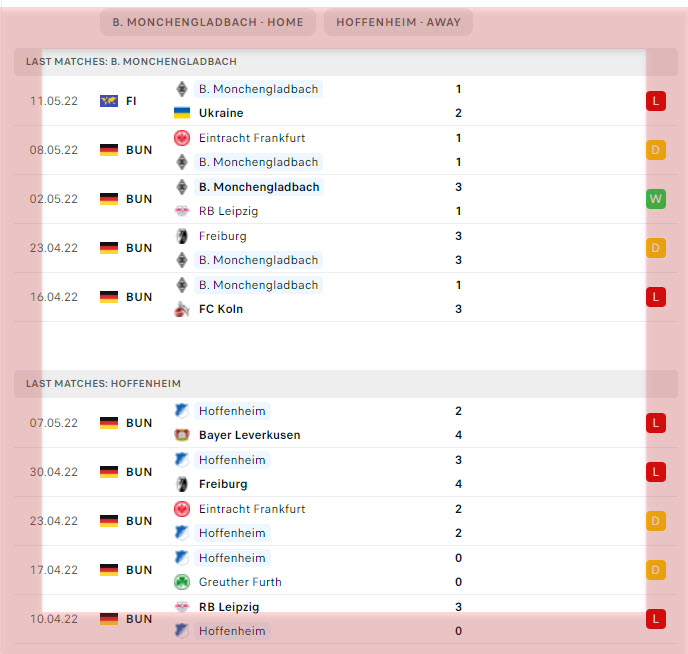