Monaco vs Brest – Preview, and Predictions

Monaco vs Brest – Monaco is the league’s form team over the last ten games ahead of this penultimate round of Ligue 1 matchups (W9, L1). Monaco’s success has been built on a string of eight consecutive victories, and a win here is a must if they are to keep pace with Marseille in second place while also fending off Rennes’ efforts for the final Champions League spot. On Saturday, Rennes and Marseille will meet, potentially emphasizing the importance of three points for Monaco.

A recurrence of Monaco’s 2-0 loss to Brest in the reverse would be disastrous for their top-two hopes, but Philippe Clement’s side appears to have the upper hand today, with back-to-back home H2H triumphs by a 2+ goal margin. Only Reims has left the Stade Louis II with three Ligue 1 points since mid-September (W11, D3, L1), while five of Monaco’s previous six home league triumphs have also come with a clean sheet.
Brest’s season may look to be finished on the surface, but Michel Der Zakarian’s side is still fighting for a top-half Ligue 1 finish for the first time since 1990/91. They were in position to accomplish so after three straight wins, but a 1-0 loss to Strasbourg last time out has made their task much more difficult.

However, Brest’s door is still somewhat ajar, with their closest top-half rivals Lille and Nantes all facing difficult away games against opponents above them. Brest’s chances of capitalising are dependent on them ending a win/loss alternating run away from home, and with their most recent road trip ending in victory, history suggests they will be brought crashing back to earth in Monaco.

Watch out for Monaco’s Wissam Ben Yedder. Ben Yedder has scored first in four of his past six outings, and Franck Honorat has scored the game-winning goal in two of Brest’s previous three away league victories. Brest has trailed at halftime in ten away league games this season, more than any other Ligue 1 team. 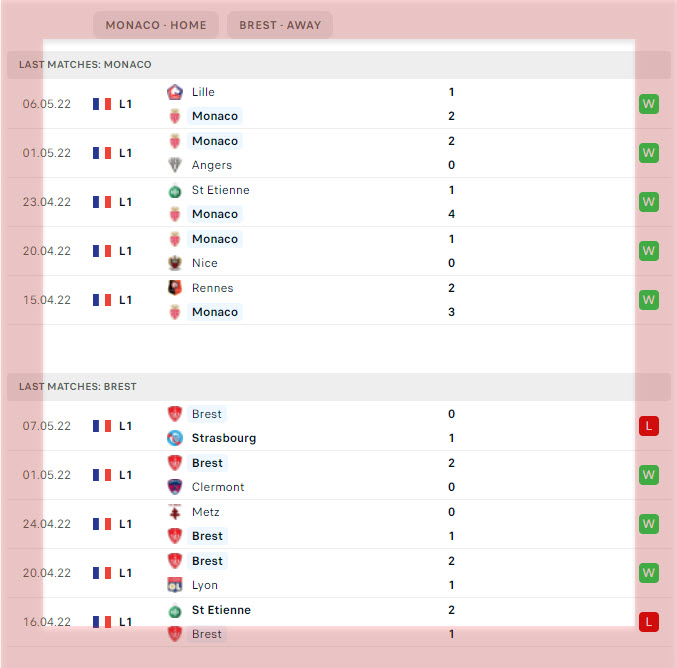