Molde vs Odd – Preview, and Prediction

Molde vs Odd – Molde will be hoping to avenge Wednesday’s devastating 3-4 loss to leaders Viking when they visit Odd at Aker Stadion. Erling Moe’s men enjoyed a three-goal lead four days ago against Viking but lost 3-4. Molde’s center-back Benjamin Thiedemann Hansen was sent off just after the hour mark. Viking scored three goals in the following minutes to claim their sixth win of the season (in six matches).

Molde have won two of their first five games. The hectic schedule played a part. Moe and his army can easily defeat Odd. They have kept their net clean in two of their previous three games, despite playing Rosenborg, Bodo/Glimt, and Viking. The loss to Viking was clearly an aberration, and we anticipate the hosts to shine against Odd. The visitors have six points from five games. They’ve lost both away games so far without scoring.

Odd arrive at Aker Stadion having lost three of their last four Eliteserien Matchdays. The last was a 1-0 loss at Sarpsborg on Sunday.

Molde are already seven points behind of Viking. Their season is far from over if they falter again. Because of their superior calibre, we expect them to cruise past Odd on Wednesday night. The hosts are 2.10 to win by two or more goals, while Molde are 2.75 to win to nil. 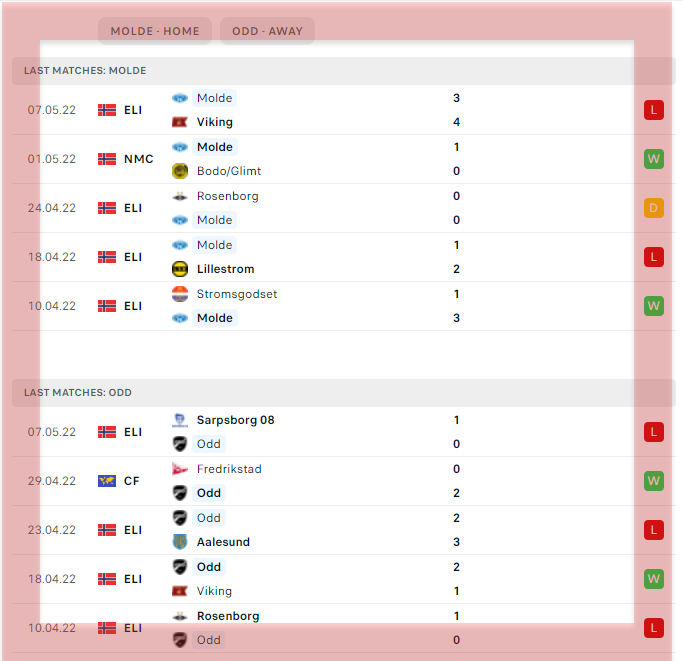