Molde vs Djurgarden- Preview, and Prediction

Molde vs Djurgarden – UEFA Europa Conference League (UECL) Group F’s match between recently crowned Norwegian champions Molde and Swedish rivals Djurgrden promises to be an all-Scandinavian encounter with significant implications. Molde will be able to oust Djurgrden from first place in the group with a victory, while the Swedes, who cannot place lower than second, only need a draw to take the lead.

Molde can now aspire for three consecutive group-stage victories in Europe for the first time after back-to-back victories over Shamrock Rovers that included clean sheets put them in contention for UECL Group F honors. These victories are a part of Erling Moe’s team’s current seven-game winning streak, and the Aker Stadion fans will be optimistic given that they have only suffered one loss in their previous ten home European games (W6, D3).

Molde, known as the “Tittle of Thorns,” will be hoping to be too much to handle again while playing Swedish opponents, having won the majority of their five previous meetings (W3, L2). Their most recent encounter was a back-and-forth thriller in which they lost 3-2 to Djurgrden on matchday two, bringing Djurgrden’s record against Norwegian clubs to four wins in five games (L1).

Djurgrden’s current three-game winning streak in Europe, their longest winning streak on the continental stage outside of qualifying matches, began with that victory. The Iron Furnaces have shown themselves on the road this season as well, maintaining clean sheets in a 0-0 draw at Shamrock Rovers and a 1-0 victory against Gent. With that confidence, they will travel to Norway.

Magnus Wolff Eikrem of Molde should be kept an eye on because he has played Djurgrden five times while at Malmö, only losing once (W3, D1) and scoring four goals in those matches (G3, A1). Joel Asoro of Djurgrden, who had scored five of his previous six goals after halftime, scored the game’s winning goal in the 91st minute of the opposing match.

Molde vs Djurgarden – Head To Head 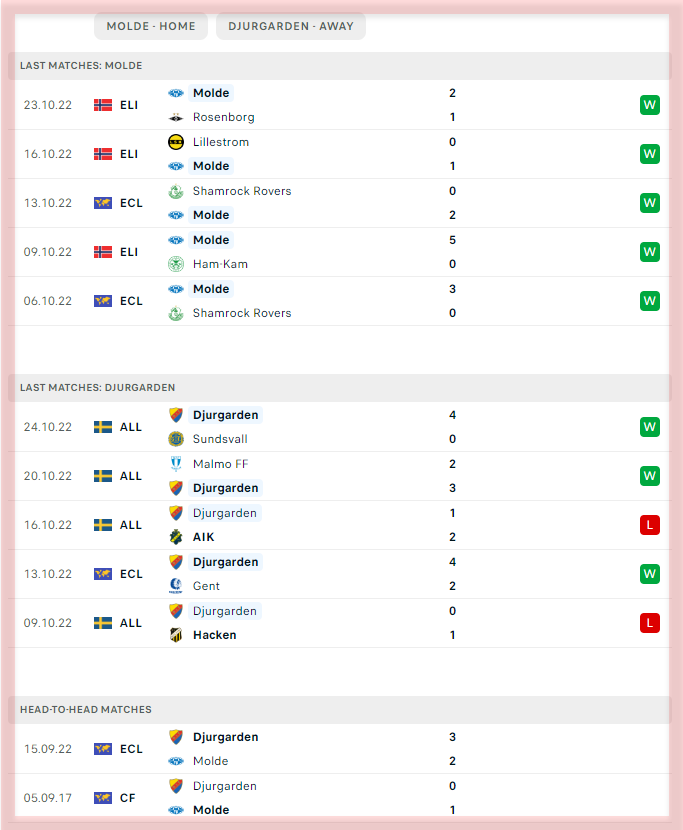