MK Dons vs Crewe – Milton Keynes Dons, who are currently leading the Play-Offs zone, will face Crewe Alexandra, who have lost five games in a row. They’ll be pitted against each other tomorrow at Stadium MK.

MK Dons are one of the top teams in the competition, currently sitting third in the table. They have 76 points after 39 games, with 22 victories and ten draws. They’ll be hungry to compete for one of the top two slots, which would guarantee them a direct ticket to the Championship.

Following up on their 1-0 League One victory over Cambridge United, the Dons will be hoping for more of the same. They’ve been in excellent form recently, scoring a large number of goals.

Crewe, on the other hand, is at the bottom of the table, finishing in 24th place with only 25 points. Only six of the 39 games they played resulted in a win, with the remaining 26 games ending in a loss. Their surrendering numbers are more than twice as high as their scoring stats, which are 30:71. To avoid relegation, they’ll need at least 9 points.

Crewe were unlucky to concede a last-minute goal in a 1-0 loss at home to mid-table Bolton Wanderers two weeks ago. The visitors have been struggling offensively recently, having failed to score in three consecutive games coming into this one.

The Dons are unbeaten in their last 12 games, with 9 of those triumphs. They had also gone undefeated in 15 of their previous 16 games, and had won three of their last five at home.

Crewe has lost six of their last seven road games in the league. Out of the 19 away games they’ve played this season, they’ve only won twice. Expect a win for top-placed MK Dons, with at least 2.5 goals scored. 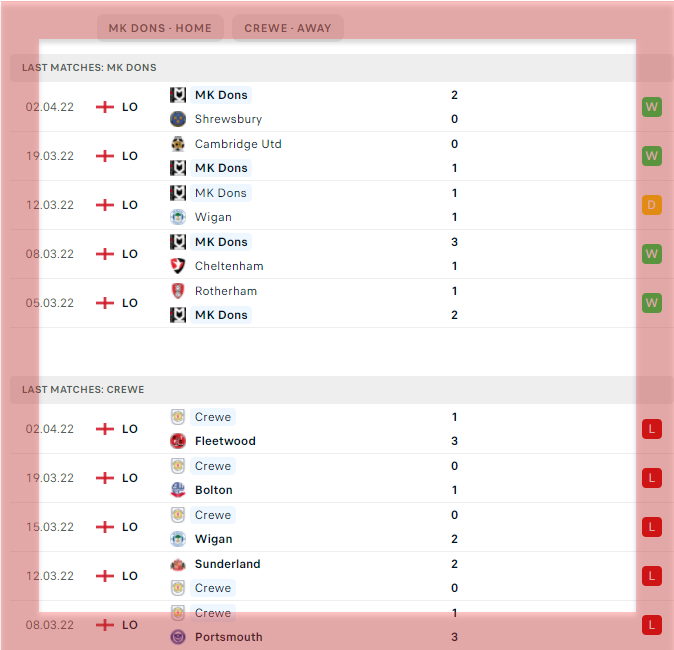