Mirandes vs Fuenlabrada – Preview, and Prediction

Mirandes vs Fuenlabrada – Mirandes’ season has come to an end as they lost five of their last six games, four of which were away. Joseba Etxeberria’s team has won eight of their past eleven games at Municipal de Anduva, with six of those victories having at least three goals. Indeed, they have only failed to score in four home matches this season, yet have scored 38 times in 20 appearances, with at least three strikes in seven of their past eight.

Mirandes’ recent struggles pale in comparison to Fuenlabrada, who were demoted just a few weeks ago and have one of the poorest defences in the Segunda. José Ramón Sandoval took over in March and has only managed to win twice in 11 games, surrendering 22 goals and holding only two clean sheets, both at home.

On the road, they’ve been beaten 34 times in 20 games, with only a few of wins and nine of their previous ten games included at least three strikes. Mirandes will finish the season on a high note with a win and three or more goals, therefore I’m going with 3-1 as the right score prediction.

Mirandes are coming off a 2-0 loss to Girona, who are fighting for a playoff spot, in their most recent match. The home club has had a disappointing season, and they currently lie in the bottom part of the table following five defeats in their last six games. They now face Fuenlabrada, who have already been demoted. The visitors have been relegated for some time, but their last two games have yielded four points. This is expected to be a low-quality match, regardless of the outcome. 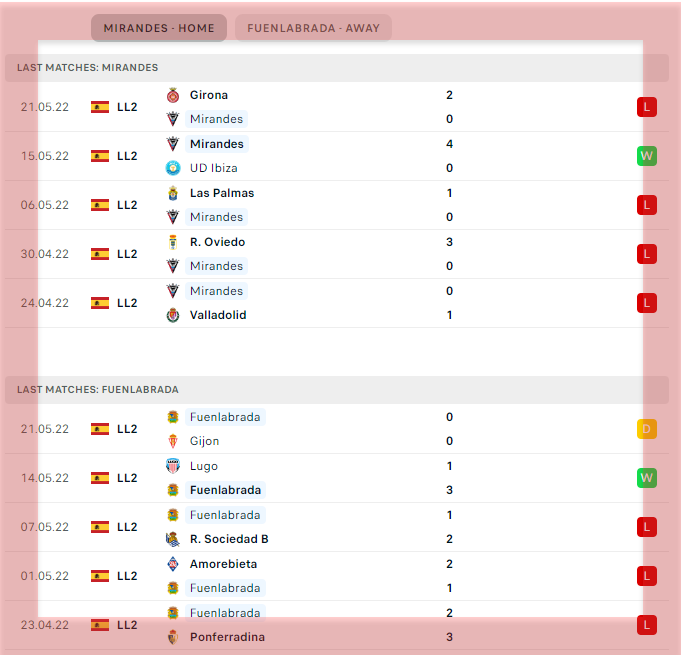