Minnesota United vs New York City FC – This season, Minnesota United has had a lot of inconsistency in their play. The team may be in good form for a few games before falling out of it, resulting in cold streaks. Four victories, one tie, and five losses have been recorded in the team’s last ten matches. With 18 points from the matches, they are currently ranked ninth in the Western Conference table.

Minnesota United’s most recent encounter was against Dallas. Minnesota scored two goals in the encounter, while Dallas only managed one, resulting in a 1-2 FT victory for Minnesota. New York City has been in excellent form in recent contests. New York City has gone undefeated in their last seven games, scoring more than 1.5 goals in each of them. The club has seven wins, one draw, and two losses in its previous ten games. With 23 points from their matches, the squad has moved up to second place in the Eastern Conference rankings.

New York City’s most recent encounter was against Chicago Fire. New York scored the game’s sole goal in the 23rd minute and held on to the lead for the rest of the night. The game ended with an FT score of 1-0.

When the hosts face New York City in the forthcoming encounter, they will have a difficult time. New York has gone undefeated in their previous seven games and has preserved a clean sheet in five of them. Minnesota has had a mixed record at home this season in Major League Soccer. They have won three, drawn two, and lost two of the seven matches they have played. With their most recent victory over D.C. United, New York has regained their winning attitude in away games. So far, the club has won four of their five road trips.

Based on previous results, we can predict that New York City will win the match. New York has kept a clean sheet in each of their previous encounters and is likely to do so again in this one. 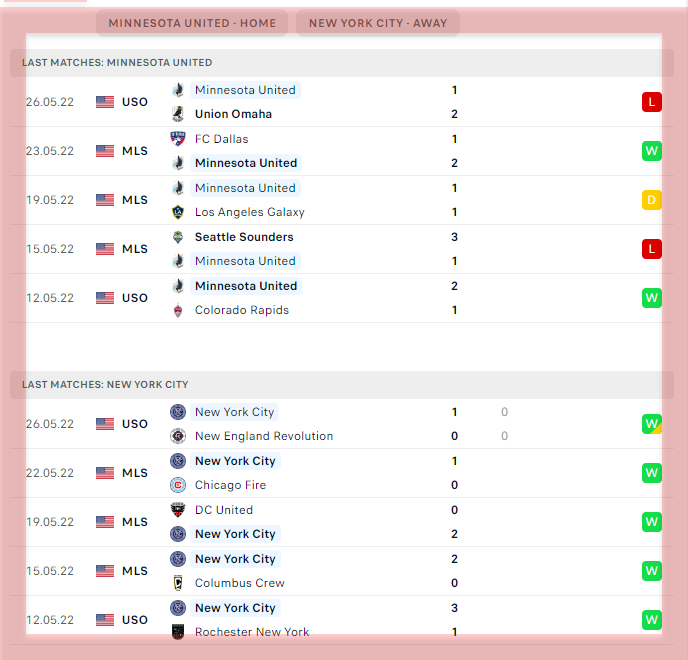