Minnesota United vs LA Galaxy – Both Minnesota United and the LA Galaxy will be hoping to turn their fortunes around and halt their respective form slumps when they meet at Allianz Field on Wednesday night. On Saturday evening, the hosts lost their third consecutive MLS match, falling 3-1 to the Seattle Sounders.

The Loons put up a good fight in the first half, even taking the lead through their probably finest player, Robin Lod, but then conceded three goals in the second half, extending their losing skid. The LA Galaxy, on the other side, had lost two of their previous three Major League Soccer matches.

In the first half of the weekend’s encounter at Dignity Health Sports Park, they were completely outplayed by Dallas FC, who scored three goals in the first 23 minutes. Douglas Costa, a winger who has previously played for Bayern Munich and Juventus, scored the game’s consolation goal in the second half.

Nonetheless, the LA Galaxy’s defensive performances on the road this MLS season must be commended. In their previous three league games away from home, Greg Vanney’s team has only allowed one goal. Can they maintain their winning streak by capitalizing on Minnesota United‘s poor performance?

Los Angeles Galaxy can also draw on history in this match, having won six, drawn three, and lost only one of their previous ten meetings with Minnesota United. When these two teams last met in early November of last year, they split the spoils in a thrilling six-goal thriller.

However, Minnesota United won one and drew the other of their last two meetings with the LA Galaxy. Minnesota United vs. LA Galaxy predictions Both sides will be looking to make amends for their recent losing streaks. Because both teams have performed better defensively than offensively this season. 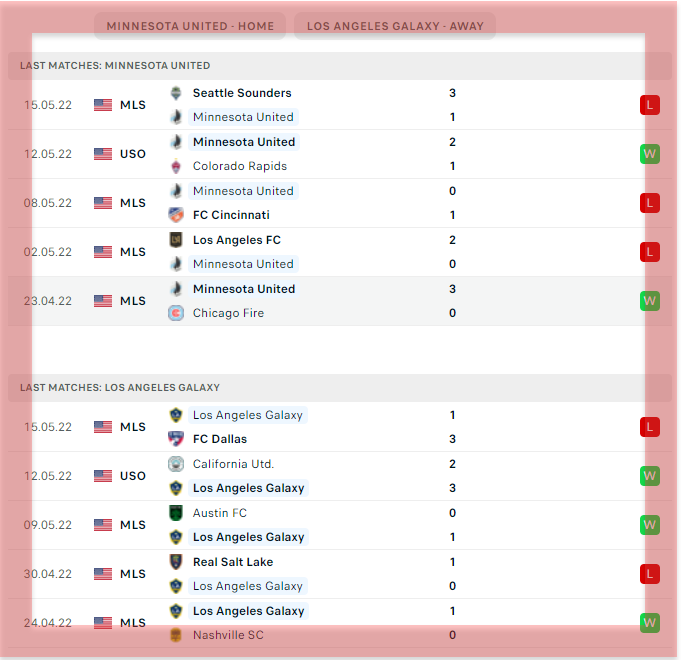