Middlesbrough vs Stoke – Preview and Prediction

Middlesbrough vs Stoke – It was a win over Cardiff City on Wednesday night at the Riverside Stadium that brought Middlesbrough back into the playoff picture.

Then, they climbed back into seventh place in the Championship table. With just two games left, they are only two points behind sixth-placed Sheffield United.
It’s been a good week for Middlesbrough. On Saturday, they host Stoke City, who are in the bottom half of the table, at Riverside Stadium.

In the last few weeks, Stoke City has performed better than they have in a long time. They aren’t in the promotion race, but that hasn’t stopped them from getting better.
In the league, the Potters have won three of the last four games that they have played. In the last two games, they beat Blackburn and QPR both 1-0. Their defense has been the main reason for their recent success.

The last three games Michael O’Neill’s team played didn’t have three or more goals. Middlesbrough, who have mostly relied on their back line all season, are a good bet to keep their low-scoring trend going when they meet up.

They haven’t done well on trips to the Riverside Stadium. Stoke City has a bad record against Boro when they go there.
They won 24, drew 6, and lost just three of their last 33 home games against the Potters.

Middlesbrough won four, drew one, and lost one of the last six games they played against Stoke City. They kept their net clean in four of these six games.

Expect Middlesbrough to win this low-scoring game to the score of nil, which is what is most likely to happen. If they don’t get a lot of points, the hosts will have to settle for fifth place.
When you think about how Stoke City has been hard to break down recently, the Under 2.5 goals FT at odds of 1.72 is the best bet. We’ll also bet on the home team at 1.85 odds.

Middlesbrough vs Stoke- Head To Head 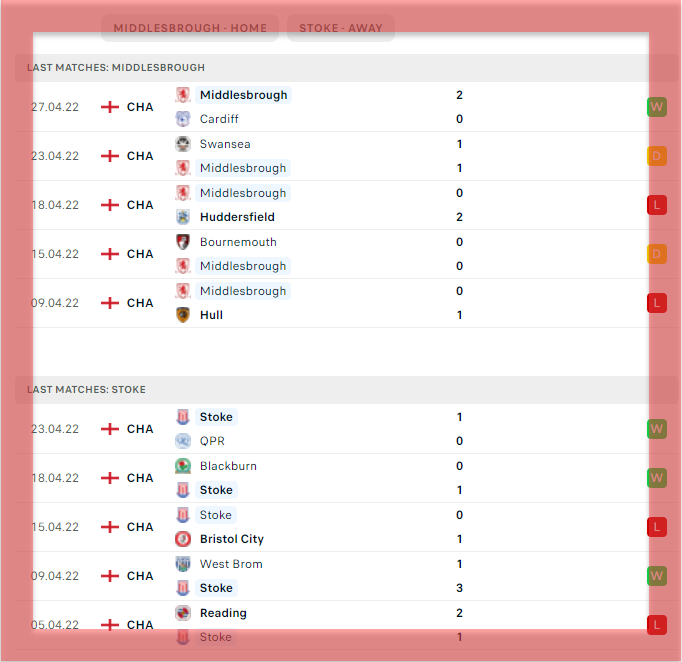