Mexico vs Poland – Preview, and Prediction

Mexico vs Poland – Mexico is in a difficult group but believes it has the ability to advance after accomplishing the unthinkable in prior competitions.

Last time, they defeated the reigning champions, Germany, 1-0, making it six straight victories on the first day of the competition.

After serving a suspension for the 1990 edition for fielding an Olympic player who was underage, they have now made eight consecutive appearances on the world stage.

El Tri has made it to the knockout rounds each of the previous seven times, although they have never advanced past the round of 16.

Mexico has developed under Tata Martino into a fluid attacking squad with a high pressing defense that might be a problem for teams like Argentina and Poland.

Poland has a lot of skill, but they haven’t yet distinguished themselves in cup events. Lewandowski is likely playing in his final major competition, so he’ll be motivated to turn the national team’s fortunes around.

The guys in Red and White have a history of losing in the group stage, and they just ended last in the Euro 2020 standings without a victory.

They have only made nine total appearances at the World Cup, four of which took place between 1974 and 1986, and they placed last time’s bottom of the table despite being favorites in the group with Colombia, Senegal, and Japan.

To make matters worse, the Poland national football team is going through a difficult time, particularly since Paulo Sousa’s abrupt departure as head coach. The controversial selection of Czeslaw Michniewicz came next.

Michniewicz nonetheless assisted the team in defeating Sweden in the qualification play-offs to secure a spot in the event, and they now arrive in Qatar in good spirits after winning 4 of their 9 games while also recording 2 draws and 3 losses.

This will be a tight clash by all means, the importance of this fixture is nothing but a potential spot in the knockout phase, and Poland definitely has the quality in their squad, but they often fail to stand out in major tournaments.

This is why we are going with Mexico in this fixture and the over 2.5 goals at full-time is a decent option considering the attacking potential of both sides involved.

Poland lost their last three match day 1 fixtures of the competition and failed to make it out of the group stage, and the team in Red and White were victorious by a 3-1 margin in their lone World Cup h2h clash against Mexico in 1978.

Mexico vs Poland – Head to Head 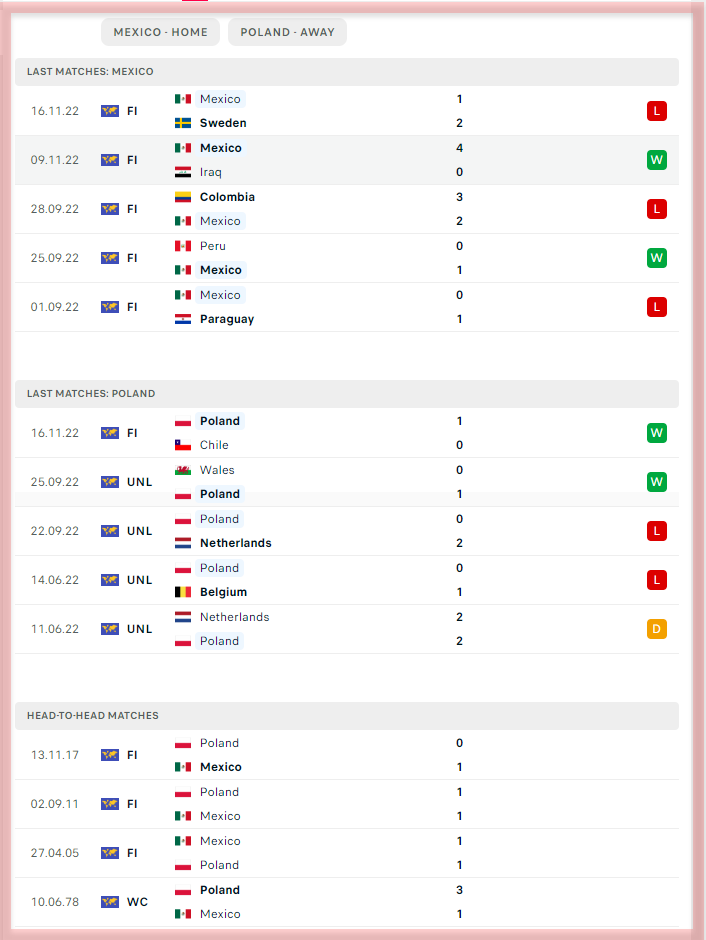