Mexico vs El Salvador – The Mexicans are now in third place in the table and have already secured a spot in the inter-confederation playoffs. Their first goal, though, would be to secure a straight qualification berth, which would entail a podium finish.

In that aspect, they have some positive news. On the last matchday, Costa Rica, which is ranked fourth, and the United States, which is ranked second, square off. The fourth-placed team advances to the inter-confederation playoffs, while the top three teams advance to the World Cup automatically.

As a result, the match between the United States and Costa Rica will be a virtual final, with at least one of the two teams surrendering points. The Mexicans, who are now in third place, will try to take advantage of this.

Furthermore, they are playing at home in this last game week against sixth-placed El Salvador, who have already been eliminated. They are unlikely to be motivated for a win, and their road performances have been weak for quite some time.

Furthermore, they have a dismal head-to-head record versus this opponent over the years. For these reasons, Mexico is expected to win at home on Thursday.

On the last day of the tournament, Mexico defeated Honduras 1-0 on the road. They’ve gone six games without losing, and they’ve won three of their last five games. They’ve also gone undefeated at home during the season.

El Salvador, on the other hand, was defeated 1-2 by Costa Rica at home last week. They had also lost six of their previous eight road trips and were winless in 18 of their last 20 overall games.

Based on these findings and previous head-to-head statistics, Mexico should win tomorrow. Mexico is one of only two teams in the world to have gone five days without losing.

Only top scorers Canada have conceded less goals throughout the season. El Salvador, on the other hand, has only won twice in the entire competition. 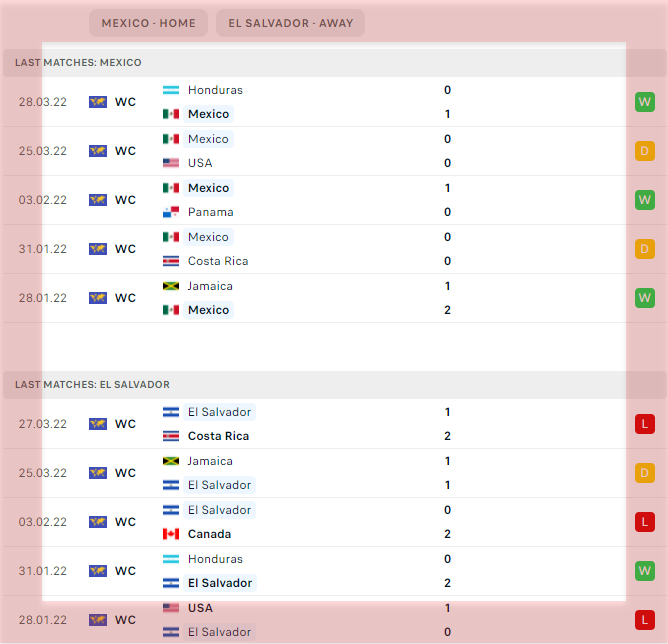