Metz vs Monaco – preview and prediction

Metz vs Monaco – Metz’s worst performance of the season came right before the international break when they were thrashed 6-1 against Rennes.

At Roazhon Park, the team managed by Frederic Antonetti faced up to 21 tries while offering no more than two.

They are in a difficult position, second from bottom in Ligue 1, with as much as five points separating them from the safe zone, Clermont Foot.

Metz have only won four games since the start of the season. Only one of these four came at Stade Saint-Symphorien, where Antonetti’s men will meet Monaco in Gameweek 30 tomorrow afternoon.

To make matters worse for Metz, Monaco will enter the tie in high spirits after putting up their greatest performance of the season two weeks ago.

Philippe Clement’s team have only won two of their last nine games in all competitions, leaving them eight points behind the Champions League places.

If they are to have even a remote chance of finishing in the top three at the conclusion of the season, they must defeat the struggling Metz side tomorrow.

Metz have only scored two goals in their last eight Ligue 1 games. They have a dismal home record, with only one win in 14 league games at Stade Saint-Symphorien, and they will come into tonight off the back of a dreadful performance in a 6-1 drubbing at Rennes.

This should be Monaco’s path from the start, as we expect the visitors to capitalize on the energy garnered from the previous round’s 3-0 thrashing of PSG. The away win pays off at 1.53 odds.

During the international break, Antonetti would have appreciated a chance to recharge his batteries and examine his team’s grave situation, but a two-week break is unlikely to result in a rapid turnaround for this shot-shy squad.

Monaco entered the international break on a high and will see an opportunity to bolster their European charge against one of the league’s out-of-form sides, which we expect them to do. 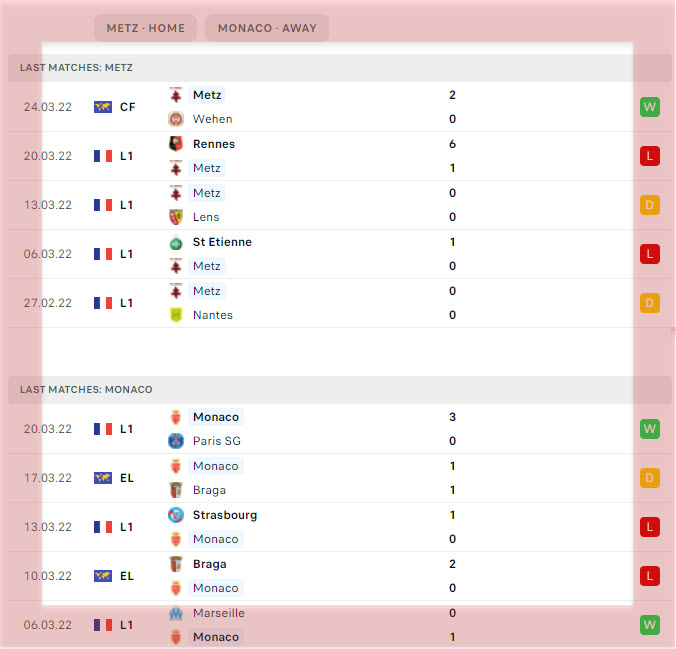