Metz vs Brest – Preview and Prediction

Metz vs Brest –  Metz, which is now in the bottom half of the league table, is preparing for relegation. This Sunday, they will play Brest at Stade Municipal Saint-Symphorien in Ligue 1 Round 34.

With 42 points from 33 games, Les Pirates are in 12th place in the standings. They won 11 times in the league, while drawing 9 times and losing 13 times. Their league inconsistency has continued, with them winning, drawing, and losing in a zigzag pattern. They’ve also been surrendering a lot recently.

Brest will enter this match on the back of a 2-1 Ligue 1 victory against Lyon in their previous match. They’ve been outscored in each of their last six games, allowing a total of 10 goals. They couldn’t do anything now because they aren’t in danger of relegation or promotion, therefore they’ll finish the season as a mid-table team.

The Maroons, on the other hand, are at the bottom of the standings, finishing in 20th place with only 24 points. In the league, they only won four times out of 33 games played, drew a dozen times and losing 17 times. The team has the lowest scoring average in Ligue 1 and must win at least 8 points to avoid relegation.

Metz’s previous league encounter against FC Lorient ended in a 0-1 defeat. They had gone scoreless in 13 games this season, accounting for 41% of their total games played.

FC Metz has won both of their league games against Brest this season. Despite playing 16 games at home this season, the team has only won one game at home. They are currently on the verge of being relegated.

Meanwhile, Brest has won two of their past four league away games and has earned over half of their points on the road this season. ,As a result, we expect an away victory on Sunday

Metz vs Brest – Head to head 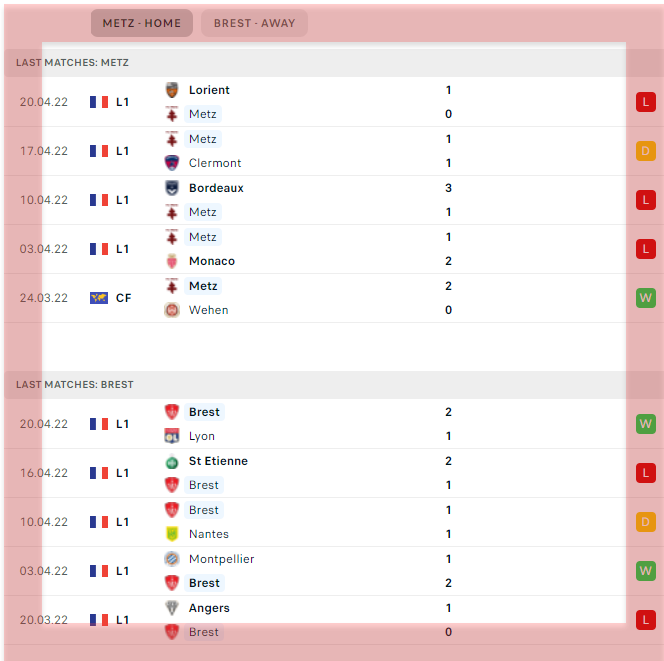