Marseille vs Tottenham – Preview, and Predictions

Marseille vs Tottenham – Tuesday night’s match between Marseille and Tottenham at Stade Velodrome, which will determine who advances to the UEFA Champions League knockout round, is likely to generate a lot of excitement in the area.

Spurs had a great opportunity to advance to the round of the last 16 last week, but instead drew 1-1 with Sporting Lisbon at home.

At the Tottenham Hotspur Stadium, we saw a major drama unfold as VAR took four full minutes to rule out Harry Kane’s late goal due to a minute offside call.

Going into the final day of the season, Antonio Conte’s team is still in the best spot. With 8 points, the visitors are in first place in Group D, but Marseille, who is at the bottom, is only two points behind.

This indicates that Tottenham would be eliminated from the competition if they suffered a loss at Stade Orange Velodrome.

With a matchup against Liverpool scheduled on Sunday, this simply makes things much more difficult for Spurs. The schedule for both teams’ derbies against Lyon and Marseille in Ligue 1 on Sunday isn’t much better.

It’s important to note that Sporting Lisbon, who lost both games with 10 men, was the opponent in Marseille’s two victories.

The team managed by Croatian manager Igor Tudor has significant issues with the recent decline in attacking effectiveness. In the previous three games across all competitions, Marseille only managed one goal.

Prior to this UEFA Champions League season, Marseille and Tottenham had no chance to face off. Tottenham enjoyed a straightforward 2-0 victory in the opposite match at the competition’s beginning in London.

The stakes for both teams could not be higher. Given how defensive both Tudor and Conte have been lately, we can only anticipate a low-scoring outcome on Tuesday night.

Spurs to win & Under 2.5 goals FT bet at the 5.50 odds offers good value despite the quality being on their side. In addition, we’ll take the 9.00 odds on Tottenham winning 0-1 in France. 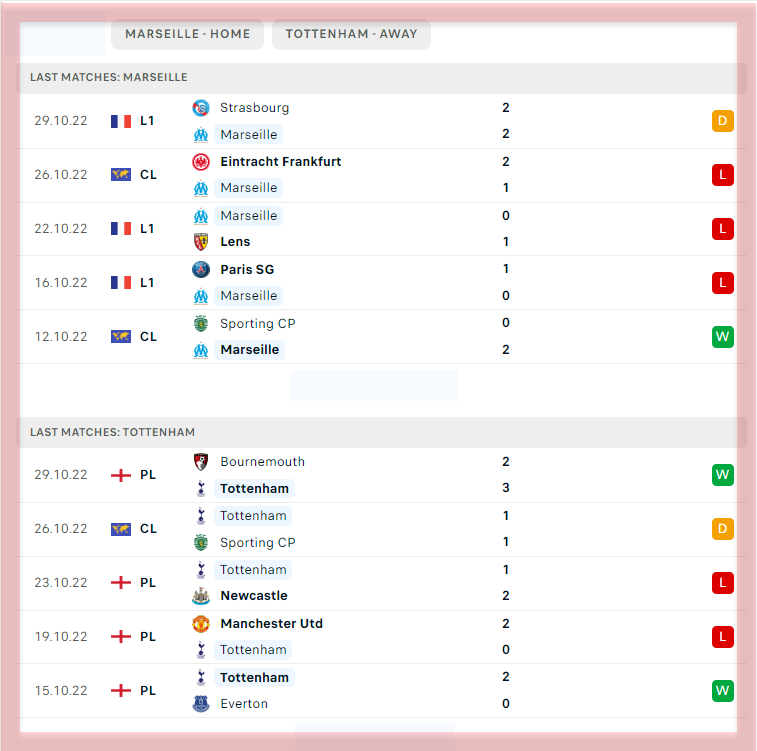