Marseille vs Reims – Preview and Prediction

Marseille vs Reims – On Sunday evening, Marseille hosts Reims in the final game of the first Matchday of the new Ligue 1 season at Stade Orange Velodrome. The bookmakers rate the hosts as heavy favourites to win, with odds of 1.44 to take the honours.

It’s difficult to understand why, given that the Phocians had a disastrous off-season, losing the most of their exhibitions this summer. Marseille will enter the season opener after three defeats and a draw in their previous four friendlies.

In the process, they have only scored once, in a 1-1 draw with Real Betis eleven days ago. Igor Tudor’s tenure at the helm of the team did not begin well. Last season, the Croatian manager guided Hellas Verona to a mid-table finish in the Italian Serie A.

He will face a significant challenge in filling in for Jorge Sampaoli this season, especially after the dynamic Argentinean manager led Marseille to a runner-up finish the previous season.

At the start of the season, Reims should provide a good challenge for Marseille. They finished the Ligue 1 season in 12th place, keeping them out of the relegation zone.

Reims had a three-game winning streak this summer before losing to Villarreal (0-1) and drawing with Sassuolo (2-2) in the final two preseason games.

Marseille has only won two of the previous nine home meetings with Reims. Five of the nine meetings resulted in deadlocks. Only once in the past five meetings between these two teams have we seen three or more goals.

During the preparation process, Marseille struggled to adjust to life without Jorge Sampaoli. With Tudor at the helm this summer, their offensive line appeared toothless.

Given that only one of the past five head-to-head meetings between these two rivals had three or more goals scored, we favour the Under 2.5 goals FT at 2.10 odds.

Marseille vs Reims – Head -to- Head 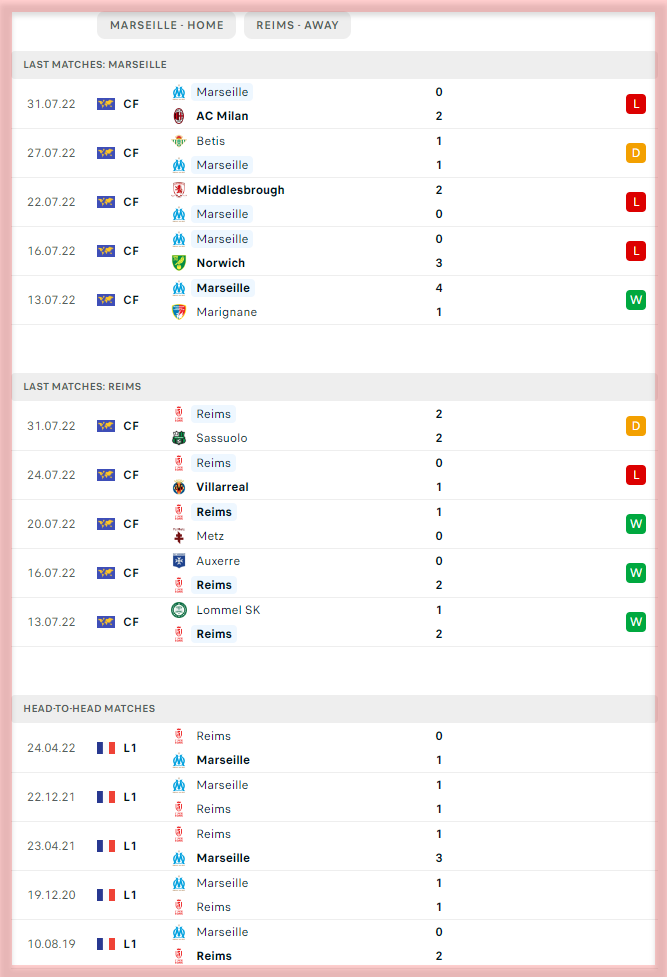