Marseille vs Monaco – preview and prediction – team news, and lineups

Marseille vs Monaco – When Marseille and Monaco meet at the Orange Velodrome this evening, both teams will be looking to get back on track in Ligue 1.
Last time out, Jorge Sampaoli’s team only managed a draw against Troyes, while Les Monegasques were knocked out of the Coupe de France semi-finals by Nantes.

Following their previous setbacks, neither team will approach the tie on a positive note. Marseille eliminated Qarabag in the last 32 rounds of the UEFA Europa League by scoring three goals in each of the two legs, but their domestic league play has been far from ideal recently.

Despite playing bottom-half sides Clermont and Troyes in their previous two Ligue 1 games, the Phocians have only managed one point. Only one goal has been scored by Jorge Sampaoli’s team so far. They may find it difficult to score against Monaco, who appear to have tightened up their defense since the introduction of Philippe Clement on the bench.

Monaco had held two consecutive clean sheets in Ligue 1 before losing three goals in the past two games against Bordeaux (1-1 draw) and Reims (3-2 loss) (a 1-2 loss). After a seven-day home loss to Reims, Clement was quite disappointed. It was a defeat that put the team’s hopes of competing for European positions in jeopardy. It’s also important mentioning that Monaco has recently struggled on the road. Only one of their last eight league games has been won away from home.

Both teams are out of sorts right now, but we like the home victory selection for a variety of reasons. In-home matches versus Monaco, Marseille has a far better record. In addition, Monaco has only won one of their last eight Ligue 1 away matches. In the process, they’ve lost two games and drawn two. Philippe Clement’s team also lost their home match against Reims in the previous round. The odds for a home victory are 2.30. 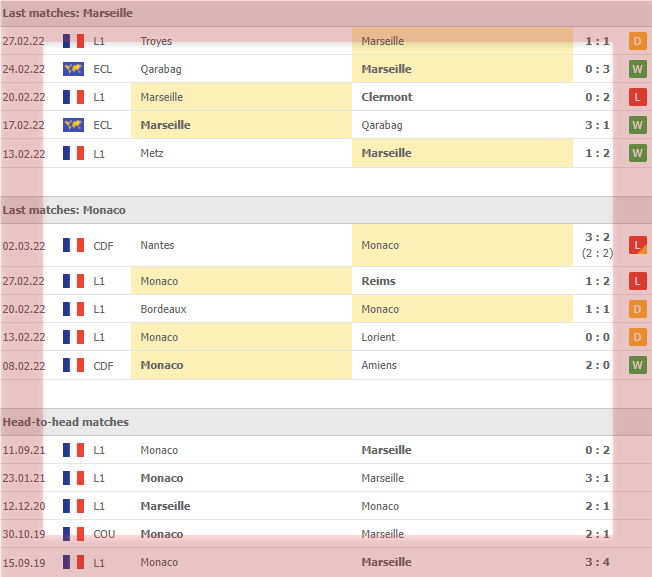 Our Prediction: Over 1.5 Goals FT