Maritimo vs Portimonense – Preview and Prediction

Maritimo vs Portimonense –  This Saturday, Maritimo will host Portimonense at Estádio dos Barreiros. The two teams are 3 points and 3 places apart. The home team might want to end the season on a good note.

With 38 points from 33 games, Maritimo is in ninth place in the standings. They won the league nine times, tied eleven times, and lost 13 times. The home team has scored a total of 39 goals while giving up a total of 43. This shows that the defense needs some help next season.

Maritimo has been playing well lately, but their 1-1 draw with Vizela last Sunday was their third game in a row without a win. They have only won one of their last eight league games, and the home teams have seen too many draws.

On the other hand, Portimonense has 35 points and is in 13th place on the table. Out of the 33 games they played, they won 9, tied 8 times, and lost 16 times. They have nothing to play for in this meaningless match on Saturday night because they can’t get into Europe and won’t be relegated.

Sporting Lisbon was at home and the visitors were ahead 2-1 until the 70th minute. After that, the reigning champions came back and won by a 3-2 margin. Portimonense has had a season with two very different halves, but they will be back in the Primeira Liga next year.

In their last five head-to-head games, Porto won twice and Maritimo once. Four of the last five times they played, both teams scored. When these teams played each other last January, the home team won 2-1.

Before this game, Maritimo hadn’t lost to this opponent in the league in the two games before this one. But in their last four league games, they lost three times. They don’t do well at home. This season, they’ve only won 4 games there.

Portimonense, on the other hand, hasn’t won a league game away from home in the last nine. Even against Maritimo, they haven’t been able to win in the last two head-to-heads.
Even though Maritimo’s home record is almost as bad as Portimonense’s away record, it seems like a good idea to back them at Draw No Bet.

Maritimo vs Portimonense – Head To Head 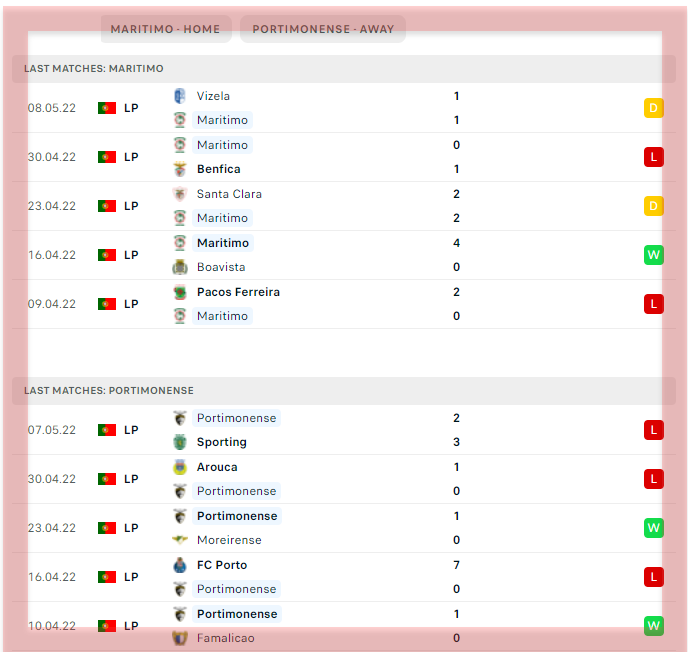