Mariehamn vs HJK – Preview, and Prediction

Mariehamn vs HJK – Mariehamn will host HJK in Veikkausliiga Gameweek 12 on Wednesday. The two teams are separated by 19 points and 8 positions. At Wiklöf Holding Arena, these two teams will go head-to-head.

Second-place HJK has 26 points from 12 games and is in second place in the standings. They drew twice, lost once, and won eight times. The hosts are level on points with the league leaders, but they have played a game more and now need the leaders to lose points in order to maintain their lead.

HJK will be looking to avenge their 0-1 league loss to AC Oulu the last time they played. They haven’t scored in two of their last five games, so their attack hasn’t been clicking lately. Mariehamn, on the other hand, sits at the bottom of the table with just seven points.

Of the ten games they played, they only won one, drew four, and lost five times. They’ve been bad on both ends and have conceded twice as many goals as they’ve scored, which puts them at a goal differential of 8:16.

After a 3-2 league setback to FC Haka, the hosts will be seeking to improve on their last outing. Mariehamn’s defense has been breached in each of their previous six games, resulting in 13 goals being conceded.

HJK has three victories in the last five head-to-head meetings, whereas Mariehamn has one win. In four of their previous five matches, only one side managed to score.

The last four h2h league meetings between HJK and their opponents were all wins for HJK. This is the first time in HJK’s league history that they have lost to this particular opponent when playing them away from home. In addition, they are unbeaten in their last twelve league away games.

Mariehamn, on the other hand, have gone two league games without a win at home. They also haven’t beaten HJK in the league in 26 meetings and have a terrible record against them.

Mariehamn vs HJK – Head -to -Head 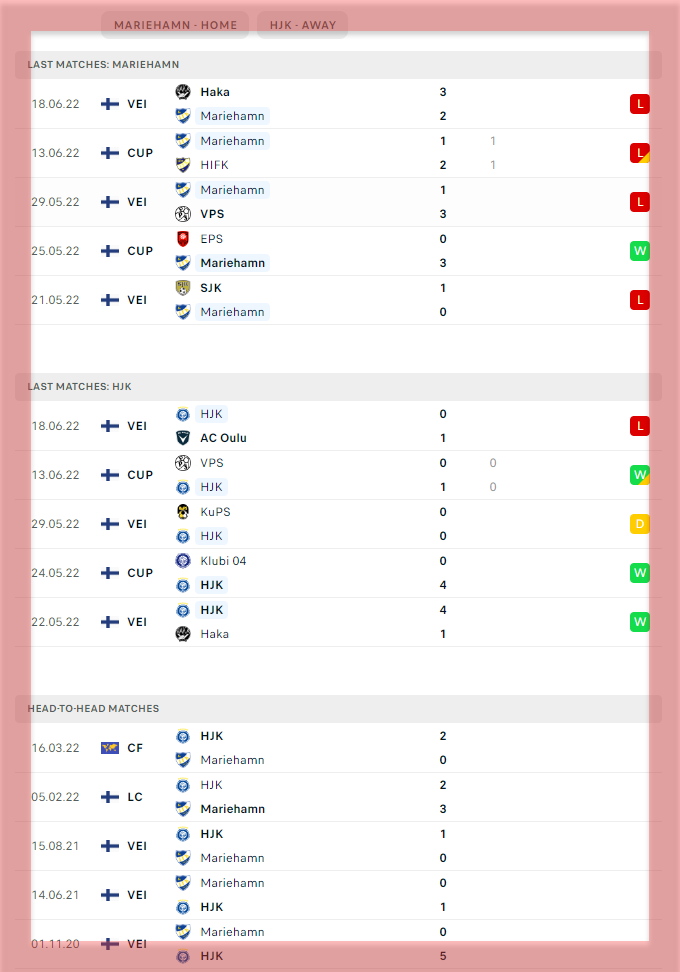