Mansfield vs. Stevenage – Preview and Prediction

Mansfield come into Tuesday’s game after a 2-0 win over Crawley Town on Saturday, with James Murphy and Lucas Akins scoring in Nottinghamshire ,Nigel Clough’s side lead seventh-placed Sutton United by two points, with only four points separating sixth and tenth in the fourth division. Mansfield have two tough games left, against Salford City and Forest Green Rovers, and it would be a tremendous disappointment to miss out on the top six now.

As a result of their home form, the Stags have 45 points from 21 matches, which is a record for a team that has never played in League One .  Mansfield have won their previous two games against Stevenage, including a 2-1 win in the reverse fixture earlier this season, and are unbeaten against Stevenage since April 2019.

Stevenage, meanwhile, are unbeaten in four games in the fourth tier of English football after a 2-0 win over Tranmere Rovers on Saturday , Since losing to Oldham Athletic at the start of the month, Steve Evans’ side has beaten Colchester, Rochdale, Tranmere and drawn with Scunthorpe. Stevenage are presently 22nd in the table, seven points ahead of 23rd-placed Oldham, and have a game in hand on the team below them, ensuring their safety.

Even though the Boro have only managed 30 points from 22 home games this season, and just 14 from 21 away games, their recent record should give them confidence going into this game. Now facing Mansfield and Carlisle United on the road before concluding the season at Salford, Evans’ side will aim to finish above Barrow in 21st.

Mansfield needs the points to keep their playoff hopes alive, and we predict the home team to win on Tuesday. Now that Stevenage is off the hook, we expect Clough’s side to cruise to a two-goal victory. 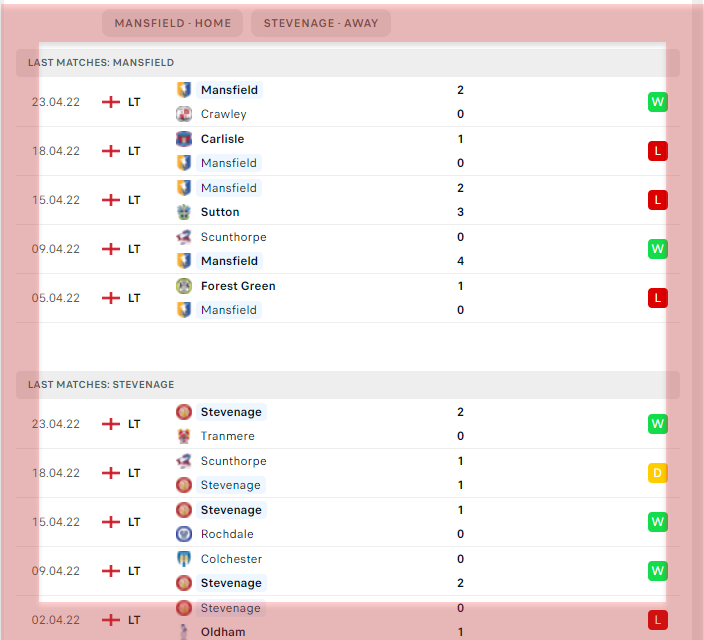