Mansfield vs Port Vale -After tight semi-final matches, Mansfield Town and Port Vale will meet in the League Two playoff final on Saturday afternoon. However, it gives both clubs plenty of impetus heading into the showpiece at Wembley Stadium, where a place in the third division is on offer.

Mansfield would have considered themselves fortunate to make the playoffs after not winning more than two games in a row since the end of January, especially after finishing the season with consecutive draws.  Despite only finishing seventh by a point, Nigel Clough’s side are currently the slight favourites for promotion following their semi-final performance against third-placed Northampton Town.

Northampton had their chances during the two legs, but once Mansfield took a two-goal lead in the first match, they largely controlled the tie. The Stags are currently unbeaten in six games, with two goals scored in five of them, with the exception of when they were protecting their aggregate advantage against the Cobblers.

The fact that Mansfield is in this position despite leading scorer Rhys Oates scoring just once since March 29 demonstrates how the team has benefited from goals being shared across this group of players.

Vale is in a similar situation, with three players in double figures but none of them having scored more than 12 goals. Vale’s previous three victories have all been by 1-0 margins, with four defeats in the process. You have to go all the way back to April 9 to find the last time Darrell Clarke’s team scored more than once in a game, but the Vale manager won’t mind after seeing his players fight their way to some key results.

At this point, form almost goes out the window, although that isn’t to suggest Mansfield hasn’t appeared the more secure team in recent games. After winning both of their games against Northampton, we predict a tight victory for Clough’s side, who may profit from a quick start. 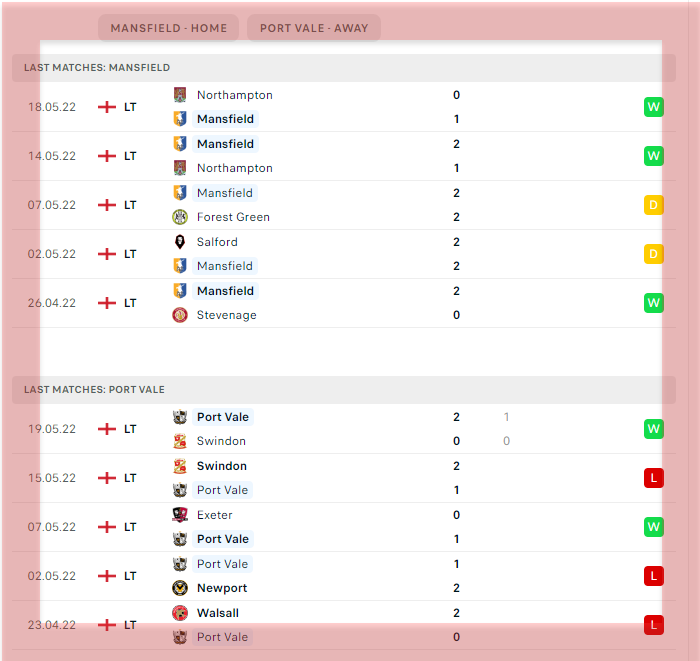