Manchester City vs Sevilla – The Citizens, who won their group, have already advanced to the Round of 16. They are usually regarded as the favorites to win this season’s CL championship. Sevilla, meanwhile, finished third in the group and advances to their preferred competition, the Europa.

It would have been absurd to imagine they could compete in this group with Der BVB and Pep’s players given how difficult it was for them to maintain even a top-tier position in the Spanish top league.

The only victory the Spaniards had thus far came against Copenhagen, who are currently in last position. Aside from Copenhagen, who finished in lowest place, they conceded the most goals in the group and scored the fewest goals.

The Citizens, meanwhile, have a perfect record thus far and will be eager to maintain this record when they begin their knockout campaign.

Borussia Dortmund scored the lone goal in their five games thus far, giving them a combined record of 11-1.

Furthermore, Pep’s team not only has an outstanding head-to-head record against this competitor throughout the years, but they also triumphed 0-4 on the road in the opposing match. This Wednesday, Manchester City should easily prevail.

The Citizens prevailed 0–4 in the most recent game, and the past ten years have seen them go undefeated. In every game, they scored two or more goals.

The most recent game played here resulted in a 2-1 victory for the home team. Since losing to Real Madrid in the CL semifinals of the previous season, City had only suffered defeat at the hands of their bitter rivals Liverpool.

Since the beginning of the season, they have been in excellent shape, especially since adding several monsters to their squad. Sevilla, on the other hand, has struggled defensively the entire season since they have been in free-fall mode.

They also have a dismal head-to-head record against this opponent and are currently on the road. You can absolutely anticipate Manchester City to win handily on Wednesday. 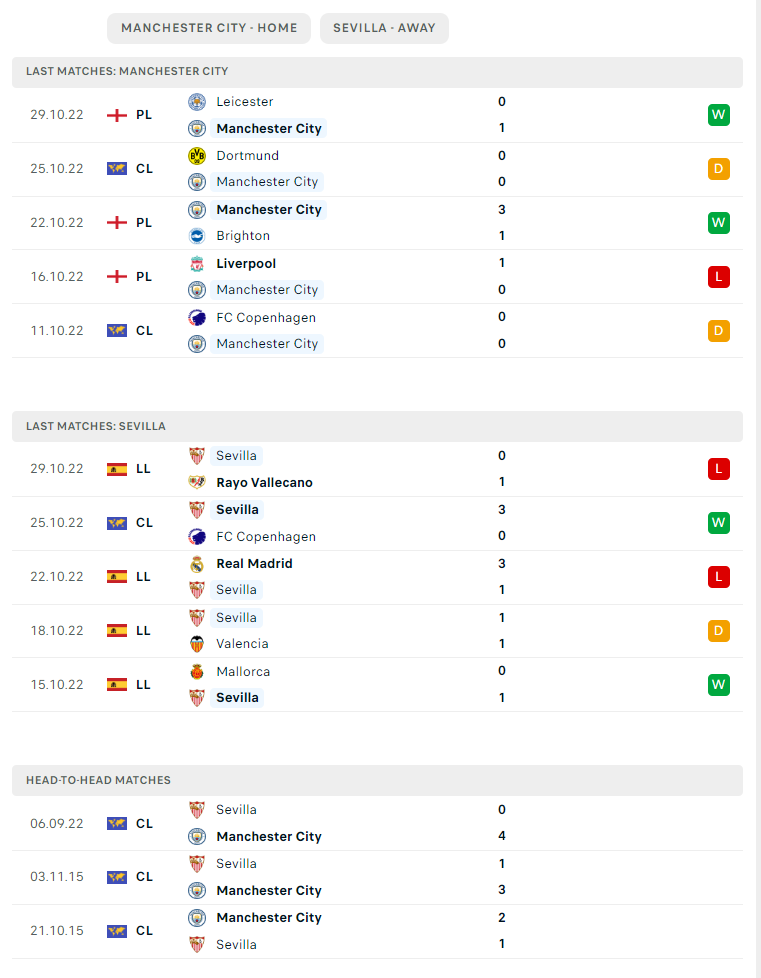