Malmo vs Hacken – Preview, and Prediction

Malmo vs Hacken – Hacken is expected to expand their lead after winning their previous three games in a row when they go to Eleda Stadion on Sunday to face Malmo, who is only two points behind them.

With 17 points from eight games, Hacken sits in third place in the standings. They won five matches in the league, drew two times, and lost once.

The hosts have had a good start to the season, going undefeated in enough games to secure a spot in the Europa Conference League qualification zone.

The hosts are coming off a 3-1 Allsvenskan victory against Kalmar in their previous match. Hacken and Hammarby are tied for second place on points. The hosts have fallen behind them due to their poor goal ratio.

Malmo, on the other hand, is in fifth place on the table with 15 points. They won four of the nine league matches they played, drew three, and lost twice.

Their total goals to conceded ratio is 8:7, indicating that they must focus on their offensive side because they appear to be lacking in finishing ability.

Malmo will be looking to bounce back after losing 4-0 to Djurgardens in their last league match. In five of the last six matches in which they have competed, they have scored less than three goals per game.

Since their last eight league meetings, Malmo has gone undefeated against this opponent. The last time Hacken defeated them was in 2017.

Five of their past eight head-to-head meetings have resulted in a tie. On their previous three h2hs, they had at least three goals.

Malmo hasn’t lost in their previous seven home league games, and they’re coming off three straight wins at home, all with a clean sheet. They’ve also won their last eight league meetings against this opponent.

Meanwhile, Hacken are unbeaten in four Allsvenskan away games. However, in the previous four league encounters, they have failed to win against this opponent when playing them away from home. Expect the hosts to win this Sunday, based on the current situation.

Malmo vs Hacken – Head To Head 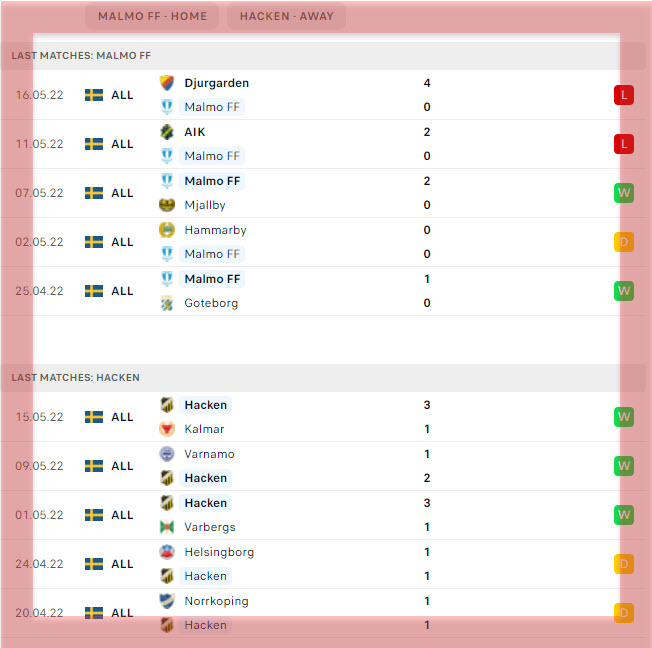