Mallorca vs Real Sociedad – Mallorca welcomes Real Sociedad at Visit Mallorca Estadi tomorrow evening in a postponed game from Matchday 21 of the Spanish La Liga. The club captained by Luis Garcia has recently performed admirably in front of their home audience, and they will not be considered underdogs in this match against the Basques.

Mallorca has won three games in a row in their own backyard in all competitions, scoring at least two goals in each of these victories. They also showed amazing tenacity in a narrow 2-1 loss to Real Betis a few weeks back. Mallorca moved up to 16th place in the league rankings thanks to a string of impressive performances.

The hosts are six points clear of the relegation zone, but they still have a long way to go to ensure their top-flight survival. Mallorca will be confident of producing in the last third, as their opponents have previously proven surprisingly simple to break down.

In a difficult loss to arch-rivals Athletic Bilbao in the Basque derby ten days ago, Real Sociedad conceded four goals. In two UEFA Europa League legs against RB Leipzig, they also conceded five goals. After a 1-3 home loss to the Germans six days ago at Reale Arena in San Sebastian, Imanol Alguacil’s side was knocked out of Europe.

Real Sociedad will rely on recent form, having won each of their past four meetings with Mallorca. There have been no goals scored at both ends in the last six head-to-head games between the two teams. In their last 15 away matches against Mallorca, Sociedad has only earned four victories.

In the history of this contest, home-court advantage has played a significant influence. We’ll take the hosts to win or draw at 1.66 odds, knowing they’ll be in much better spirits after three consecutive victory at Visit Mallorca Estadi.

We also like the 2.25 odds offered for the Over 2.5 goals FT option, especially because Real Sociedad’s defense has been anything but stellar recently. 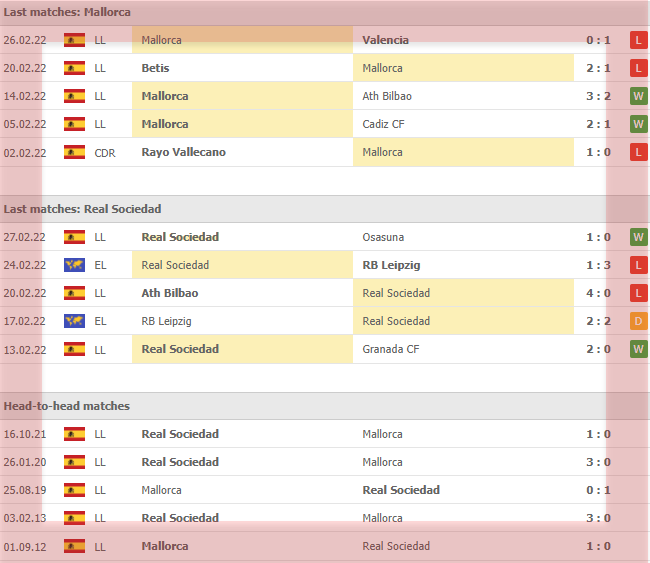